HomeFood5 Weird Vietnamese Food We Dare You to Try

5 Weird Vietnamese Food We Dare You to Try 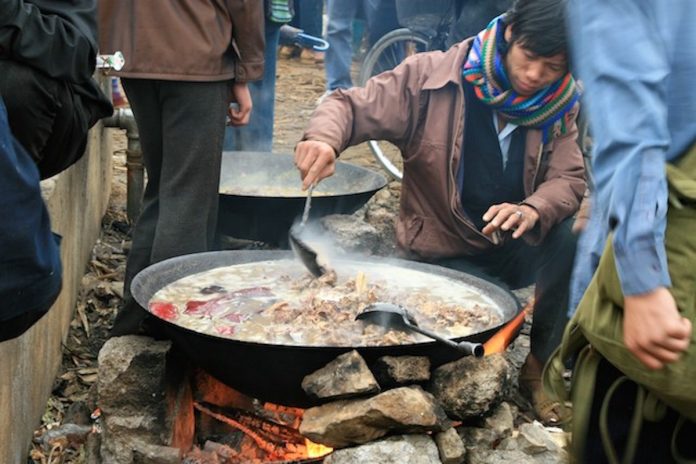 Trying out local food is a big part of travelling. And with tons of local delicacies, Vietnam is a foodie’s paradise for anyone looking to broaden their horizons. Apart from the usual pho and banh mi, Vietnam is also home to a whole host of weird Vietnamese food!

Today’s article is for the daredevils and adventurous eaters. From larvae to snake hearts, here are 5 weird Vietnamese food we dare you to try!

Đuông dừa are the larvae of red palm weevils, and they live in coconut tree stems. They are eaten in a variety of ways, from deep fried to grilled, and even completely raw!

In Mekong Delta, this is a specialty dish. Apparently, đuông dừa is most yummy when they are alive and still wriggling, and the larvae is simply paired with fish sauce. If you can get over the squirminess, they’re actually pretty chewy and slightly sweet. Some even say they taste a bit similar to cheese!

In case you’re not up for live larvae but still curious about what they taste like, then try them cooked! Some popular methods of cooking include grilling, frying with butter, or even steaming with coconut juice.

Tiết canh is from Northern Vietnam, and it is a soup made with raw animal blood. Duck blood is most common, but it can also be pig or goose blood.

The preparation method starts with collecting fresh blood in a bowl, then mixing with fish sauce to prevent premature coagulation. The next step is to cook the meat and innards, chop them finely, then sprinkle peanuts and a variety of herbs over them. Lastly, the blood and fish sauce mixture is diluted with some broth left over from the cooking, then poured over the meat dish.

Tiết canh can be enjoyed cold, where the soup coagulates into a jelly-like texture. If the idea of consuming raw blood sends shivers down your spine, some local chefs have created a replication of the dish using beetroot juice mixed with gelatin.

You’ll see the word ‘chả’ a lot in Vietnam, which means patty. Pretty much any kind of meat can be made into chả, from chả lụa (pork sausage) to chả cá (fishcakes). Chả rươi is a popular dish in Hanoi, and it’s made from sandworms!

These sandworms live in mangroves and coastal waters. We’re not gonna lie, they look pretty frightening. They are first put in hot water to remove their tentacles, and then mixed with raw egg. Add in some herbs and spices, and the mixture is fried until it is crispy and golden brown. Enjoy them on its own, or with rice for a full meal!

Chả rươi is a specialty because these sandworms can only be found in autumn. Some vendors use frozen sandworms outside of autumn, but the taste of the fresh sandworms is still superior!

‘Meat stew’ might sound tame, but thắng cố is a weird Vietnamese food made with every edible part of the animal. Yes, including its bones, organs, innards and blood. A dish originating from the H’Mong people in Sapa, the dish is traditionally made from horse, but it can also be cow, buffalo or pig.

According to the locals, the horses are butchered for food when they grow old and become too weak to work. The meat is chopped into small pieces, washed, then tossed with different spices into a big pot of water. It is then left to stew over several hours.

It’s not the most appealing-looking dish, but over the years thắng cố recipes have been picked up by modern restaurants. In these places, the recipes have been modified to cater to the city dwellers’ taste buds. For the most authentic taste however, you should try it in Sapa!

7km northeast of Hanoi is Vietnam’s snake village, Lệ Mật. Here, the locals have been farming snakes for generations, from king cobras to grass snakes. They also eat every part of the snake, including its still-beating heart!

The snakes are prepared into a wide variety of dishes – soups, stir-frys, and even spring rolls. Its texture is somewhere between fish and red meat. And if the thought of eating snakes makes you recoil, just wait until you hear that local men consume its live, beating hearts in a shot with rice wine!

The locals believe that snake hearts have aphrodisiac properties. Even Gordon Ramsay tried it on his trip to Vietnam! If you can handle the sight of a snake being slaughtered right in front of your eyes, we imagine that it’ll make for a great story to tell. How many people can say that they’ve chugged a raw snake’s heart?