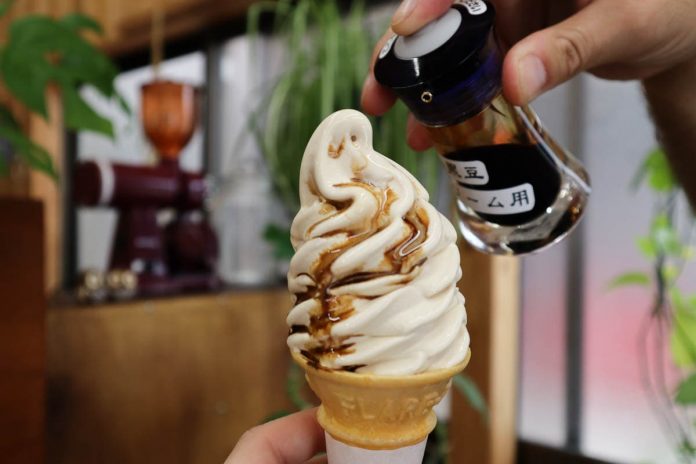 Frozen desserts are a favourite in Japan, especially in the heat of the summer. As the land of all things weird and wonderful, from hotels to vending machines and restaurants, trust Japan to also have a whole host of weird ice cream flavours too! While you might already be familiar with the common ones like matcha and black sesame, here are ten weird ice cream flavours from Japan we dare you to try!

If squid ink pasta is a thing, why can’t squid ink ice cream be a thing too? It started off as a novelty flavour, but in recent years has become more common in Japan. We love the jet black colour which is even more intense than charcoal ice cream! Unfortunately it might not taste as good as it looks – squid ink ice cream is said to taste pretty bland with a mild fishy flavour.

Wasabi is great with sushi, and we’ve also seen lots of wasabi-flavoured snacks. In Japan it’s also used in sweets and desserts such as kit kats and ice cream! It’s not the weirdest flavour on this list, but it’s certainly unusual. Considering that wasabi packs quite a punch, we’re not sure how we feel about spicy ice cream. What do you think?

Miso soup is a staple in Japanese cuisine and Nagano Prefecture makes 40% of the country’s miso. It’s also where miso ice cream originates from! Honestly? We could get behind the mixture of savoury and sweet. Kind of like salted caramel!

Tofu ice cream is relatively common in Japan. It can be vegan-friendly ice cream made with soy milk, or milk ice cream that’s tofu-flavoured, or tofu-based ice cream. Tofu ice cream tastes almost exactly like tofu. Silky and smooth, only colder and sweeter!

Popular Japanese brand Yamato Soysauce & Miso has been trying to promote soy sauce ice cream and even soy sauce as an ice cream topping! While the idea hasn’t quite taken off outside of Kanazawa yet, it’s certainly a unique Japanese flavor. The savouriness of the soy sauce gives a caramel-y flavor to the sweet vanilla ice cream!

Since kombu and wakame are such an important part of Japanese cuisine, you should be surprised to find some forms of seaweed ice cream. They can be in seaweed flavour, topped with nori seaweed, or both! Seaweed ice cream has a tinge of umami to it that will pleasantly surprise you. No fish flavours, don’t worry!

Imagine licking your ice cream and it licks back at you. Beef tongue ice cream sounds like a nightmare and it’s one of those weird ice cream flavours that we just don’t get. However, it is actually one of the most popular flavours amongst the Japanese at the Yokohama Ice Cream Festival! Apparently it tastes like ‘milky beef stew’, which doesn’t sound very unpleasant, until you remember what you’re eating.

Goya bitter melon is an ingredient from the Okinawa region and the local people have found a way to make it work as an ice cream flavour. Even people who don’t like bitter gourds might be pleasantly surprised, since the bitterness is really subtle.

Shirasu are tiny fishes known as whitebait, commonly used as a topping in Japanese cuisine. It definitely doesn’t look very appetising on ice cream, but it’s actually a local delicacy on Enoshima Island in Kanagawa. Sometimes, even a splash of soy sauce is added into the mix!