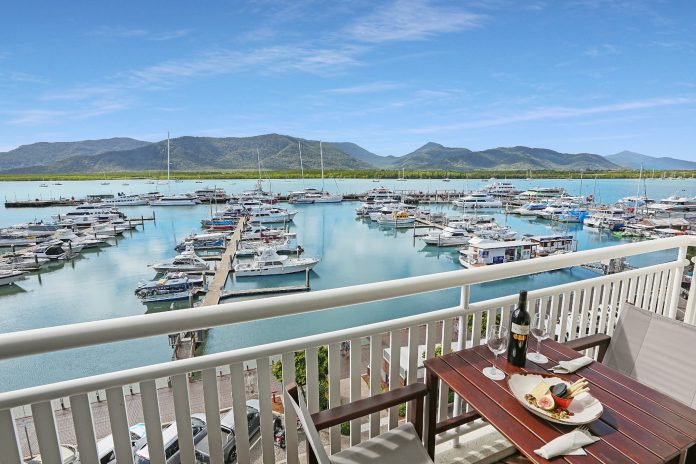 Now you have your list of things to do in Cairns, but what about the places to eat? There are a heap of great restaurants within Cairns city itself, but it’s hard not to agree that some of the best places to dine are along the waterfront. The Cairns Marina and Esplanade are very popular spots for a meal outside, with places to eat to suit different budgets. You’ll find everything from fine dining to fresh seafood right off a boat! Here are some of the best waterfront restaurants in Cairns you definitely should check out.

1. Mondo On The Waterfront

Part of the Hilton Hotel but also open to the public, the menu at Mondo On The Waterfront is very eclectic. You’ll find everything from Mexican fajitas to Sri Lankan chicken curry, chicken schnitzels to Balinese fried rice. The chicken satay deserves a special shoutout, having lived in Indonesia for a few years, the satay and fried rice was about as authentic as you can get outside of the country!

2. Dundee’s Restaurant on the Waterfront

Dubbed “The flavours of Australia”, these guys do fresh local seafood, Australian beef, bush meats, pastas and salads. Expect towering seafood platters, kangaroo and crocodile skewers and a delightful Australian Sampler plate. Prices are not so cheap, but the service is brilliant and the food outstanding

Next to Dundee’s is Ochre, who serves a modern Australian menu with seafood and steak, along with international flavours. Fusing Indigenous bush ingredients with North Queensland produce, Ochre is one of the most unique dining experiences in Australia. Items like the sensational Salt and Pepper Quail will hit buttons you never knew were there!

Hemingway’s Brewery is where to get great pub grub, so expect lots of tacos, burgers, pizzas and chicken schnitzels to go with your award-winning craft beers. They also often have live entertainment on weekends and it’s a great place to hang out with friends and family. Best of all, the food is great! The tacos were some of the best we’ve ever had and that’s saying a lot!

Prawn Star is hands down, one of the coolest waterfront restaurants in Cairns. In fact, you can’t really call it a restaurant, and it isn’t exactly waterfront. Prawn Star is a boat directly on the water! Restored from a fishing trawler, the menu here is very simple, but the seafood are some of the freshest you’ll ever have.

Ollie’s Italian is an ode to amazingly fresh ingredients, cooked the Italian way. You won’t go wrong with the hand-stretched Neapolitan style pizzas and fresh pasta made by hand (including the ravioli!) You can also get some dry aged meat to go along with the waterfront views and killer cocktails.