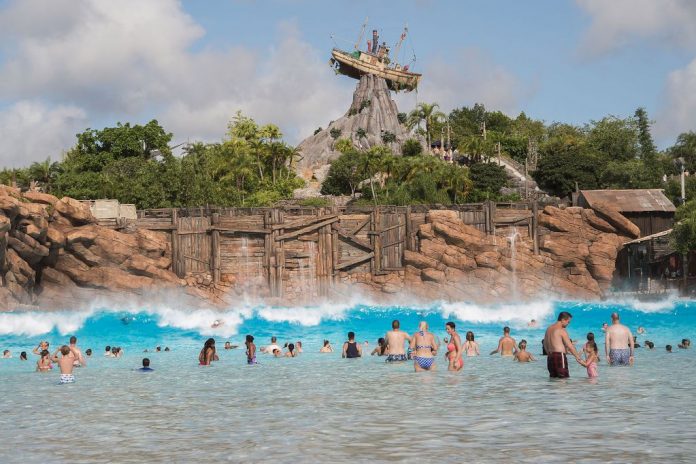 As one of the best destinations for a family vacation, Florida is known for its world-class theme parks like Universal Orlando and Walt Disney World. As the theme park capital of the world, there are really great rollercoasters and also really great water parks in Orlando! Some of the best include Aquatica near SeaWorld Orlando, Volcano Bay at Universal Orlando, as well as Typhoon Lagoon and Blizzard Beach at Disney World. From lazy rivers to thrilling water slides, there are many places to have fun, cool off and get wet. Here are the best water parks in Orlando!

Conveniently located across from SeaWorld Orlando, Aquatica Orlando is one of the most popular water parks in Orlando. It has a southern Pacific theme, featuring Australian and New Zealand animal mascots. Aquatica’s signature attraction, Dolphin Plunge is currently receiving a revamp. Come 2022 it will become Reef Plunge, an underwater slide where guests will zoom past a vibrant array of marine wildlife such as Commerson’s dolphins, leopard sharks, sardines, and other coldwater fish. We also love the rides that folks can enjoy as a family, such as Riptide Race, the world’s tallest dueling racer, Ray Rush and Walhalla Wave. When you need a break, rent a cabana for some shade, snacks and midday naps!

Disney’s Typhoon Lagoon was created during a huge storm that flung surfboards into the trees and tossed boats onto roofs. The storm’s force carried Miss Tilly into the sky, impaling it on Mount Mayday and becoming the centerpiece of the park. Well, not really, but Disney sure writes a good story! Typhoon Lagoon is the predecessor of Disney’s two water parks and there are lots of attractions for the whole family. Older kids can hop on the thrilling Crush n Gusher, while surfer families will love the Typhoon Lagoon Surf Pool. Little ones love the whimsical Ketchakiddee Creek, a water playground with pint-sized slides, water cannons and other fun features.

In Disney’s words, there was a freak snowstorm in Orlando that led to the development of Florida’s first ski resort. Ski lifts were put up, toboggan runs were laid down and an entire resort area blossomed around the mountain of snow. When the snow melted, it became Disney’s Blizzard Beach, “the most slushy, slippery, exhilarating water park anywhere!” This second Disney Park is a great place for some family competition with slides like Toboggan Racers and Runoff Rapids. Thrillseeking boys and girls should check out Mount Gushmore – one of the world’s tallest and fastest waterslides! There are also lots of activities for little ones such as Tike’s Peak and Cross Country Creek.

Volcano Bay is a water theme park for the whole family, with immersive themes, interactive elements and thrilling attractions. Many exciting slides here like the Krakatau Aqua Coaster and the Ko’okiri Body Plunge have a minimum height of just 48 inches, which means that many younger kids can join in on the fun too. There are also lots for kids under 48 inches to enjoy too, such as the Runamukka Reef and Tot Tiki Reef kids’ areas where they can splash, slide and climb to their heart’s content. Ready for a break? Relax on Waturi Beach while the kids play in the sand or the wave pool.

LEGOLAND Florida Water Park was designed mainly for toddlers and preschoolers. There’s a splash safari where kids six and under can splash with giant DUPLO creatures, a play area for older kids, and a not-so-wild wave pool that won’t overwhelm little ones. There are also many family-friendly activities, as well as the Splash Out speed slides and Twin Chasers tube slides. And it’s not a LEGO park without some creative building! On the Build-a-Raft Lazy River, kids can use floating LEGO bricks to design and build their own raft, or build and race their own boats at the Build-A-Boat station.