HomeJapan6 Things to Do in Nagano in Winter

6 Things to Do in Nagano in Winter 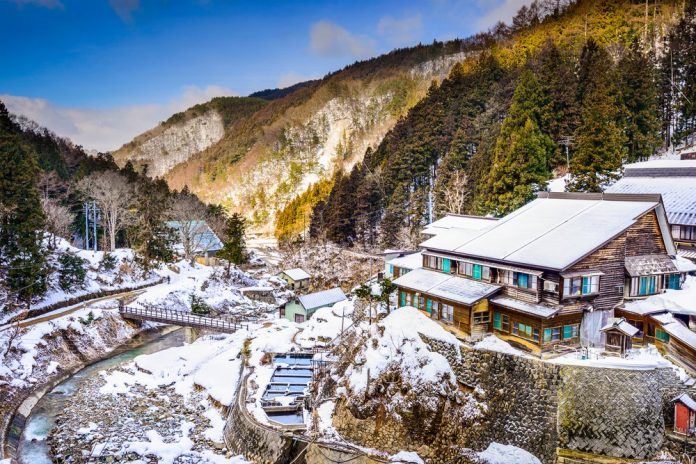 The Land of the Rising Sun remains closed off to foreigners, but that doesn’t mean we can’t dream of a getaway. Nagano is the capital city of Nagano Prefecture, and it also happens to be a popular winter destination in Japan. Its snow-covered mountains make it a top location for snow sports, but those aren’t the only things to do in Nagano. There are also delicious mountain cuisine, seasonal festivals and of course – onsen! Here are the six best things to do in Nagano during winter.

Zenkoji is one of the most important Buddhist temples in Japan. In fact, the development of Nagano revolved around the temple. No matter the season, a visit to Zenkoji is a must. The temple was founded in the 7th century and it houses the very first Buddhist statue brought into Japan. The original statue is kept away, while a copy of it is displayed to the public every six years. The next showing was supposed to be in 2021, but due to Covid-19 it’s been postponed to 2022. At the temple, you can also stroll within the grounds, and explore different parts of the temple such as the pagoda that serves as the Zenkoji History Museum.

2. See the snow monkeys at Jigokudani

In Nagano, not only the humans take dips in hot springs. Perhaps the most famous thing about Nagano are the snow monkeys at Jigokudani. These monkeys come to soak in natural hot springs to keep themselves warm on the cold winter days! It is a unique sight only available in winter, so it’s no surprise that many people visit during this time. You can take pictures with them, but make sure to keep a safe distance as they are still wild animals. And also make sure to wear good shoes – the area provides ample hiking opportunities!

Hit the slopes and experience winter sports! There are a number of ski resorts that will keep you occupied with things to do in Nagano. One of them is Hakuba Goryu Snow Resort, which offers both beginner and advanced slopes. Not big on skiing or snowboarding? Snowshoeing is one of the most popular activities here! The resort is also very family-friendly, and those visiting with children will enjoy both the indoor and outdoor areas for kids to enjoy. There are also tons of dining options available.

4. Take a dip at Nozawa Onsen

After a full day of Nagano’s powder, warm up your bones with a hot dip. One of the best onsen spots is Nozawa, a traditional Japanese onsen village. It dates back to the 8th century and it’s renowned for its hot springs and traditional ryokan since the Edo period. Life still revolves around the bathing culture here with over 30 onsen to choose from! You can stay at one of the ryokan or at Nozawa Onsen Ski Resort to hit the slopes the next day. If you’re here in January, make sure to check out the annual Nozawa Fire Festival (more about this next!)

In winter, the landscape of Nagano turns white. As snow falls steadily in the mountains, it’s that time of year for winter sports, hot springs and winter festivals. Why stay inside when you could warm up in a magnificent fire festival? Nozawa Fire Festival is one of the biggest fire festivals in Japan. 25 and 42 are considered “unlucky” ages, and men in the village of this age have to prepare and defend a large wooden shrine. As the sun sets, the older men will climb up the shrine, while the younger men approach below. The madness begins when the men attempt to throw flaming torches at the structure and struggle with its “defenders”. The shrine eventually catches fire, but don’t worry, by this time the defenders have moved away to safety. The Nakasendo Trail is a historic route that connected Tokyo – then Edo – and Kyoto during the Edo Period (1603-1868). Though much of the original route is gone now, several sections can still be hiked. This includes the picturesque Kisoji in Kiso Valley. Several post towns here particularly Magome, Tsumago and Narai have been preserved to look the way they did centuries ago. Today, visitors come from all over Japan and the world to explore the stone paths and wooden buildings of a bygone era.