HomeUnited States7 Things to Do in Honolulu, Oahu

7 Things to Do in Honolulu, Oahu 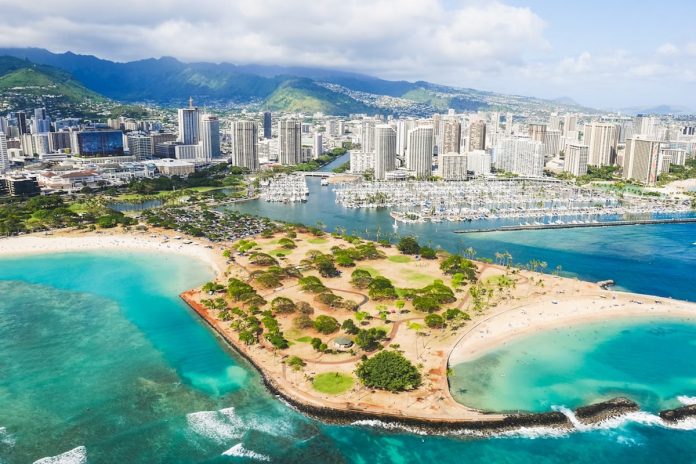 Honolulu on the island of Oahu is Hawaii’s capital and gateway to the chain of islands. Its mild tropical climate, rich natural attractions and extensive beaches make it one of the most popular destinations in the world. From hiking to snorkeling, museums and historical sites, there are so many wonderful things to do in Honolulu. Your biggest worry should be if you have time to fit it all in! Check out these fun things to do in Honolulu for an unforgettable time.

You have to set aside at least a day (or all of them) for beach time when in Honolulu. Once a favourite spot of the kings and queens of the Hawaiian archipelago, it was here on Waikiki Beach that islands’ nobles rode the first longboards. Today, us mere mortals can enjoy its powdery sands and blue water too. However, it can get very crowded, so you may want to check out other quieter beaches in Honolulu too!

Manoa Falls is one of Oahu’s most accessible waterfalls, with renovations to include gravel in some sections and tree stumps to help cross muddy areas. Cascading down 150 feet (45m), the waterfall is mesmerizing, but a large part of the fun is getting there. The hike to the waterfall takes about 30 minutes one way, and it’ll take you deep into the rainforest. When you arrive, the pool might look tempting, but swimming is highly discouraged due to the risk of Leptospirosis.

You’ve gone to the beach and into the rainforest, now it’s time to head up a volcano! Diamond Head is one of the most iconic sights on the skyline of Honolulu. If you’re the outdoorsy type, then hiking to its crater should be one of the top things to do in Honolulu for you. The uphill hike is just under a mile, and your reward will be breathtaking views of the land, water and sky.

If you love marine critters, Hanauma Bay offers some of the best snorkelling experiences. In fact, it was so popular that it was damaged due to overtourism. Thanks to restoration efforts that began in 1990, today the bay is pristine with a thriving ecosystem. In order to protect the bay, the number of visitors is limited, and everyone has to watch an educational video on how to ensure that they do not harm the reef and wildlife.

Built in 1882 by King Kalakaua, Iolani Palace was the home of Hawaii’s last reigning monarchs. After the monarchy was overthrown in 1893, it served as the Capitol for almost 80 years. In the 1970s, the palace was restored and opened as a museum. Needless to say, visiting it is one of the top things to do in Honolulu, and it offers meaningful lessons about the culture and history of Hawaii.

The Polynesian Cultural Center is a living museum where you can try your hand at traditional activities such as hula dancing and canoeing. The 42 acres of tropical splendor is divided into six villages that represent different regions of the Polynesian islands: Hawaii, Aotearoa, Fiji, Samoa, Tahiti, Tonga. Every village is filled with exciting activities. Enjoy Samoan song and dance, gaze upon a Fijian skyscraper and play poi balls at the Aotearoa village.

Most of you would know that December 7, 1941 was a fateful day for Oahu and the United States. The USS Arizona Memorial honors those who gave their lives for the country. As one of the most popular things to do in Honolulu, a visit to the USS Arizona Memorial should definitely be part of your itinerary. There are also several other museums and visitor centers that you can visit, and together they make up the Pearl Harbor Historic Sites. It can be difficult to confront this part of human history, but you’ll definitely regret not visiting Pearl Harbor!