HomeJapan7 Unforgettable Things to Do in Fukuoka

7 Unforgettable Things to Do in Fukuoka 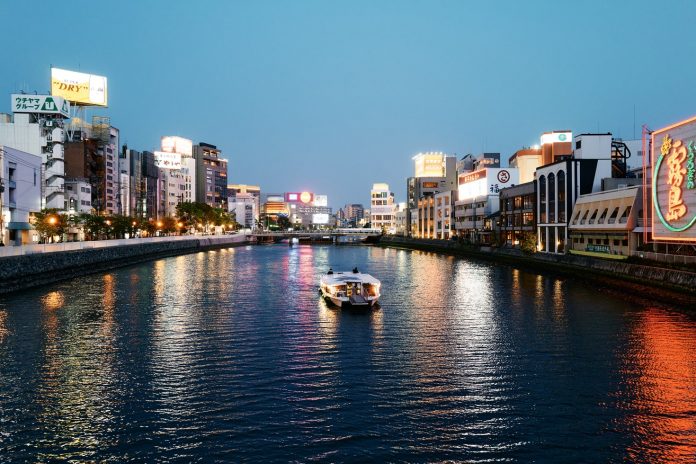 Kyushu’s largest city, Fukuoka has long been an important harbor city due to its location. (Fun fact: it is closer to Seoul than to Tokyo!) A progressive city, there’s more to do in Fukuoka than just eat ramen. From robots to castles, shrines to surfing, here are the best things to do in Fukuoka.

Dating back to 757, Kushida Shrine is the oldest temple in Fukuoka and regarded as the guardian temple of the city. Every July, the shrine hosts the largest festival in the city, the Yamakasa Gion Matsuri. It concludes with a spectacular race where men carry festival floats from the temple to different locations in the city. If you’re here during this time, the festival is a must-see. But even outside of that, Kushida Shrine is worth a visit for its unique features, such as a gingko tree that’s over a thousand years old.

Located across the bay, this beautiful park is home to flower gardens, an amusement park, a zoo, playgrounds, cycling trails and green spaces. The best time to visit is between mid-March to early autumn, where you’ll find millions of flowers blooming throughout the park. Cherry blossoms bloom in spring here, while other flowers like roses, tulips, and sunflowers grow here at different times of the year. Measuring nearly four kilometers across, the park is pretty expansive. You can rent bicycles at the entrance gates to make exploring easier!

Fukuoka Castle used to be the largest castle on Kyushu before it became an unwanted symbol of the feudal past. The castle was almost completely torn down after the Meiji Restoration and only ruins of walls and a few turrets remain. With its lookout points and walking trails, the park attracts many visitors, especially in spring during the cherry blossom season. Highlights include seeing a number of the original castle gates, turrets, and towers within the extensive castle grounds. The ruins of an even older guesthouse once used for visiting diplomats is also pretty interesting!

4. Eat your fill at yatai stalls

Fukuoka’s open air food stands, yatai, are one of the city’s best defining symbols. These little booths seat about eight to ten people and serve up local food in an outdoor environment. Typical dishes include yakitori, oden and most famously Hakata ramen. There are dozens of yatai across the city, but the best place to find them is on the southern end of Nakasu Island. For a truly local dining experience, enjoying a beer with some late night food at a yatai is one of the best things to do in Fukuoka.

Fukuoka Tower is literally the top tourist attraction in Fukuoka. Standing at 234 meters, it is the tallest seaside tower in Japan. For some of the most beautiful views you’ll ever see, Fukuoka Tower features an observation deck with 360-degree views of the city and bay. The tower itself is covered in mirrors and there are impressive light displays at night which change with the seasons and special events.

Itoshima is where ​​most local Fukuokans go for a day on the beach. Its surf season runs from mid-August, through winter and into spring. The waves at Itoshima tend to be fairly mellow, enough fun for the more experienced but not so intimidating that it scares off those new to the sport. The beach has rental shops and surf schools, which is great if it’s your first time or if you need a refresher!

Like Hakata ramen, motsunabe is a local Fukuoka dish. It’s a type of hot pot dish made with beef or pork tripe or other offal. Cooked in a pot on the table with cabbage and chives, it’s absolutely delicious and one of the best things you can eat in winter! To complete the dish, Champon noodles are also often included and cooked together.