HomeUnited Kingdom7 Top Things to Do in Bristol

7 Top Things to Do in Bristol 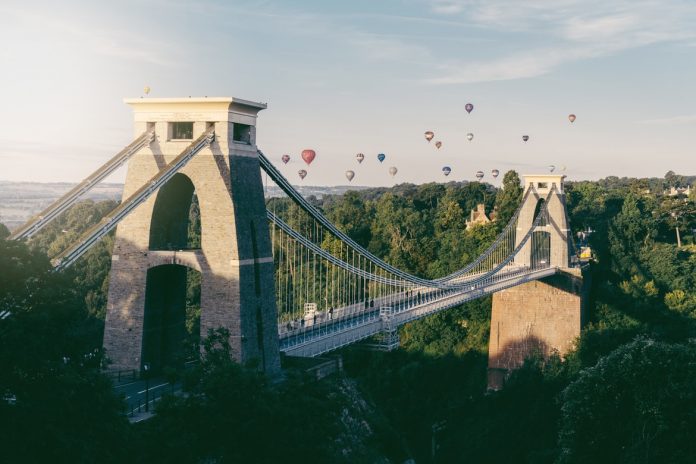 Bristol is the largest city in the south of England and it’s actually been named the most artistic city in the UK. It’s also a completely green city, with over 400 parks and gardens spread throughout. As you explore the things to do in Bristol, you will definitely encounter a lot of them. Apart from that, Bristol has also been named the kindest city in the UK! So what’s not to love about it? From Banksy to bridges, markets to museums, and churches to castles, this guide shows you all the best things to do in Bristol!

Situated in the oldest part of town, The Exchange is of particular historical significance. A grade I listed building built between 1741 and 1743 by John Wood the Elder, for many years it was used as a corn and general trade exchange. Today, it is home to the St Nicholas Market open Monday to Saturday.

Another reason why The Exchange is so interesting is because of its clock. Installed in 1822, it’s so special because it has two minute hands! The red hand tracks the Greenwich Mean Time and the time in London, while the pink hand tracks Bristol’s local time. The second minute hand was added as a way of standardizing the time across the country with the introduction of the railways!

One of the best things to do in Bristol is to go hunting for Banksy artwork. We don’t know too much about this world-famous street artist, but what we do know is that he was born in Bristol in 1974, and that he was part of a wave of street art that was taking the city by storm in the 80s.

Banksy’s most famous Bristol works together make for a great self-guided walking tour of the city. Discover the Banksy Bristol story through 13 significant Banksy locations and audio commentaries. There are also plenty of stops to sample some of the bars, cafés and restaurants the city has to offer!

Brandon Hill is the oldest Park in Bristol and where you’ll find Cabot Tower. The tower was built in 1897 to commemorate the 400 year anniversary of John Cabot’s journey from Bristol to what is now Newfoundland in Canada. Cabot Tower is not only one of the best things to do in Bristol, it’s also free! You can climb to the top of this 105 foot tower that will give you excellent views over the city and the harborside.

Next to Bristol City Council Headquarters is the beautiful Bristol Cathedral, one of England’s greatest medieval churches. It boasts some of the UK’s most important medieval architecture. This includes a Norman Chapter House, brightly coloured chapels, lofty arches and vaults of a unique hall church design. Enjoy a rich programme of services and events, a shop, cafe and peaceful garden.

Located right in the middle of the Bristol docks, the SS Great Britain was built in 1843 and at the time, it was the largest ship in the world. It was the first to cross the Atlantic Ocean in 1845, later going on to serve as a warehouse ship in the Falkland Islands. Unfortunately it was sunk in 1937, and a full 33 years later it was refloated and brought all the way back to the dry dock in Bristol where it was first built.

Today, the ship is a museum ship and visitors can actually go down into the dry dock and see the damage and hole. The interior has been refitted to replicate how it would have looked back in its day, and there are also spaces where one can just look directly into the empty skeleton of the ship.

Bristol Museum and Art Gallery spans over three floors with 19 galleries. It tells the story of the world from the beginning of time, all the way through to present day. And if you’re a Banksy fan then you definitely have to pay a visit to the museum, because back in 2009 under the strictest confidentiality, Banksy organized an exhibition here that took over the museum. It was called Banksy versus Bristol, and one of the pieces from the exhibit was left behind.

The world-famous Clifton Suspension Bridge was designed by the Victorian engineer Isambard Kingdom Brunel who described it as “My first love, my darling”. It took 33 years to complete the bridge, but unfortunately Brunel didn’t live to see its completion in 1864. Originally designed to cater for horse-drawn traffic, today the bridge serves as a crossing for millions of vehicles.

The Ashton Court Estate was once the gracious home of the Smyth family, and is now a historic park just 10 minutes from the center of Bristol. Here, discover magnificent old oak trees and see the deer graze in an estate that first became a deer park over 600 years ago. On the estate’s higher ground, there are two 18-hole pitch-and-putt golf courses, with stunning views across the city. There are also special trails for mountain biking, and plenty of open space for family picnics. Ashton Court is also one of the few places you can take off in a hot air balloon or discover the unusual sport of Disc Golf!

9 Scariest Theme Park Rides For the Daredevil in You

Top 10 Things to Do in Liverpool

9 Day Hike Destinations in the Philippines