The Transcaucasian Trail – A Hiking Route Between Asia & Europe 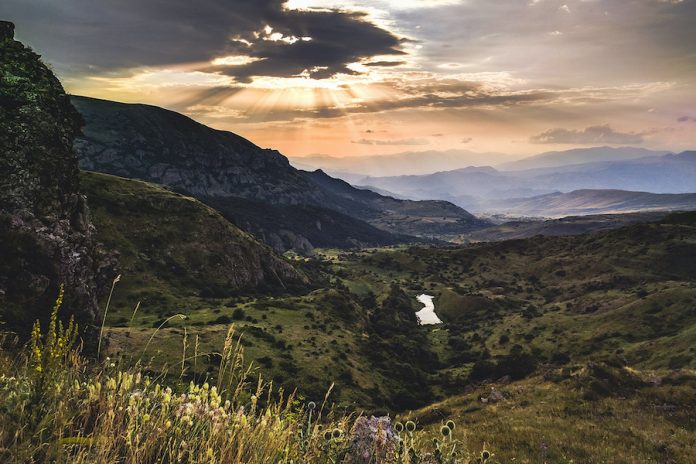 If you haven’t heard already, the Transcaucasian Trail is the next big thing in the trekking world. At over 3,000 kilometers long, it borders Europe and Asia, connects over 20 national parks, many UNESCO sites and protected areas in Azerbaijan, Georgia and Armenia. It will take hikers into the heart of the Caucasus – some of the most culturally and ecologically diverse regions.

While the full route is still undergoing development, you can now trek sections of the trail in Georgia and Armenia. Read on to find out more!

What should you know about the Transcaucasian trail?

Generally, the best time for hiking is from June to October. Outside of that, December to March usually see the landscape dusted with snow. In addition to the hazards of steep terrain and mountain weather, not all trails are perfectly marked. Having GPS is highly recommended! You should also expect challenging conditions on the Transcaucasian Trail. Think washed-out bridges, dangerous river crossings in high water, aggressive cattle dogs, giant hogweed, frequent summer thunderstorms with intensive lightning. Access to emergency medical care and search and rescue is not always available. And on some parts of the trail there are no guesthouses, so you will need to spend some nights outdoors.

Did we scare you off yet? No?

Since the trail is still under development, you cannot do the whole journey in one super hike (yet). Right now, the trails are split into parts and will require separate trips between the section in Georgia and the ones in Armenia. Let’s talk more about them!

This trail takes hikers from Chuberi in the Neskra Valley, east to Ushguli, the highest village in Svaneti. At 139.7 kilometers, the trail is divided into five sections: Chuberi to Nakra, Nakra to Becho, Becho to Mestia, Mestia to Adishi and lastly, Adishi to Ushguli. The landscape changes quickly along the way, from deep forested valleys and rushing rivers, to high alpine meadows overlooking the jagged peaks and glaciers of Greater Caucasus. Because of the area’s altitude and high levels of precipitation, this trail is only completely snow-free after July.

This 79.3 kilometre trail will take you on a journey through the spa town of Dilijan and the surrounding mountains of Dilijan National Park. Apart from stunning limestone escarpments and broadleaf forests, your hike will also pass close to some of the most iconic historical sites in Armenia, including the early Christian monasteries of Haghartsin and Goshavank. The national park is one of the oldest and most developed ones in Armenia, and it offers additional adventures like visiting the stunning Sarcapat area or climbing Mount Apakekar. Along the way, you can stay at guesthouses, or take advantage of the many camping opportunities outside.

The Gegham Mountains offer some of the wildest, most breathtaking natural landscapes and hiking opportunities in Armenia. A chain of volcanic cones and craters, it runs diagonally through central Armenia, forming a natural barrier between Lake Sevan and the Ararat plain. Open steppe surrounds the peaks, which descend to the lakeshore in the east and drop into the chasms of Khosrov Forest in the west. This 114 kilometer section of the Transcaucasian Trail is inhabited only in high summer by nomadic herders and is not for the uninitiated. It is remote backcountry that requires full self-sufficiency for several days, and it is as utterly spectacular as it is demanding.

Newly launched in 2019, this dramatic 125 kilometer stage of the Transcaucasian Trail weaves through Vayots Dzor, the ‘gorge of woes’, Silk Road caravanserais, UNESCO-listed monasteries, and the world’s oldest known winery. Self-sufficient hikers will find many wild-camping opportunities along the route, and you can modify the itinerary to suit your schedule and level of challenge. For those who prefer spending their nights indoors, guesthouses are available at all but one of the stops (Gnishik). This part of the Transcaucasian Trail is especially great for hikers who want to combine nature with historical experience!

8 Top Places to Visit in Azerbaijan For The Unconventional Traveler