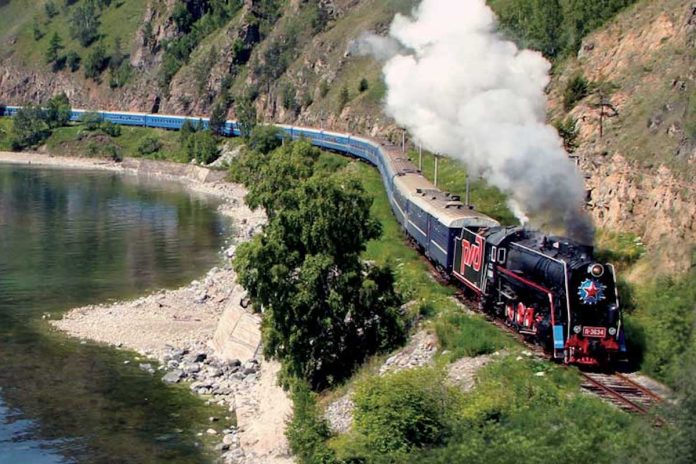 Haven’t you heard? Slow travel is coming back into style. Train travel may not be the fastest way to cross borders, but it sure allows you to see sights that would not be possible flying! If you’ve ever wanted to experience Central Asia, a Silk Road train trip is hands down, the best way to do it.

Retrace one of our civilizations most important trading routes in this 13-day voyage of a lifetime. Aboard the luxurious Golden Eagle train, you can expect to travel in comfort with well-appointed en-suite cabins, state-of-the-art amenities, fine dining and elegant surroundings. After all, it is the only private train of its kind operating along the Silk Road!

Let’s a look at what else you can expect on this Silk Road train trip through Central Asia.

A representative will meet you upon your arrival at Almaty Airport, where you will then be transferred to the five-star InterContinental Hotel for a one-night stay. It is opposite the Presidential Palace in Almaty’s Republic Square and features beautiful views of the Tian Shan Mountains!

The largest city in Kazakhstan, Almaty is notable for its wide tree-lined boulevards. Just a short distance from the city, apple orchards thrive in abundance. You will take your first city tour which includes a visit to Panfilov Park, and the Ascension Cathedral which was built entirely out of wood! We’ll also go to Shymbulak Resort, where a cable car ride will give you spectacular views of Almaty and the surrounding Tian Shan Mountains.

Tashkent is the capital city of Uzbekistan and we’ll spend some time in this modern Soviet-style city. Our tour includes the Old Town, where traditional homes and religious buildings line the narrow streets. In a small library here, you will also get the chance to see one of Islam’s most sacred relics – the world’s oldest Koran. Next, visit the Railway Museum and the Museum of Applied Arts.

Samarkand was one of the most important stops along the Silk Road, prospering from its location between China and the Mediterranean Sea. Founded in 6th Century BC, its stunning architecture hints at its former status as one of the largest cities in Central Asia. It is known for its architectural remains from the 14th to the 17th Century, when it flourished as the capital of the Turco-Mongol empire of Timur.

Today, we will visit some significant sites such as Registan Square, the Bibi-Khanym Mosque and the Ulugh Beg observatory, one of the earliest Islamic astronomical observatories.

The city of Bukhara has long served as a center of trade, scholarship, culture, and religion, which should give you an inkling of what to expect. The highlight of our tour is a visit to The Ark, a fortress of the Emirs of Bukhara which has been destroyed and rebuilt many times over.

We then travel out of the city to visit the Palace of the Moon and Stars, which is as enchanting as its name. In the evening, enjoy a barbecue on the station platform before our train departs for Turkmenistan!

Today you’ll visit Merv, an ancient city which was robbed of its former glory as a major city along the Silk Road. Falling to an invading Mongol horde in 1221, the resulting destruction was devastating with over a million people killed. Although the city was rebuilt afterwards, it never regained its former prosperity. Merv was razed for the last time in 1788 and 1789, and by the 1800s it was completely deserted.

The Golden Eagle makes a brief stop at Ichoguz, and you’ll have the option to leave the train and make a short journey to Darvaza’s famous burning gas crater. A spectacular sight most spectacular at night, the 70-metre wide crater has been burning for over 40 years!

The train continues on to the capital of Turkmenistan, Ashgabat. As the ‘Las Vegas of the Kara Kum’, Ashgabat is a relatively modern city that sits upon the ruins of the Silk Road city Konjikala. The city’s extravagant golden domes, white marble buildings and grandiose national monuments juxtapose the desert setting. Highlights include a trip to the National Museum and Kipchak Mosque!

The next part of your journey will take you to the ancient city of Khiva which has 2,500 years of history. Its strategic location at the crossroads of the routes between Mongolia, Russia, China and Persia makes it one of most important trading posts on the Silk Road.

Today, Khiva is a UNESCO World Heritage Site. Going back in time, you will visit its impressive mosques, madrassas, bazaars and minarets within its ancient walls.

Finally after all that touring, we enjoy a relaxing day on board as our train takes us across the vast expanses of Kazakhstan towards Russia. You are on the last leg of this Silk Road train trip!

Volgograd might sound foreign to you, but if we say Stalingrad, it would probably remind you of some history lessons. As the site of WWII’s Battle of Stalingrad, it is where the Russians fought back the Nazis over five months, one week and three days to alter the course of the war.

Immerse yourself into the city’s history with a visit to the museum and the Mamayev Kurgan memorial.

Arriving in Moscow, you will check into the stylish five-star Four Seasons Hotel in the very heart of Moscow. The hotel is a short walk from the Kremlin, Red Square and the Bolshoi Theatre.

Tour the grandeur of the Kremlin – the heart of Moscow. See the treasures of the Tsars in the Armoury Chamber. Visit Red Square, an icon of Russia’s former military and political might with its fascinating architecture, such as the ornate St Basil’s Cathedral’s, the beautiful GUM department store, built in Tsarist times, and the sombre site of Lenin’s tomb.

You can also choose to travel out of the city centre to Sergiev Posad. It is home to one of the most beautiful monasteries in Russia, and the spiritual centre of the Russian Orthodox Church. Or, visit the famous State Tretyakov Gallery (National Museum of Fine Art).

It is time to conclude your Silk Road train trip and make your way home, wherever home is. Of course, you are free to extend your stay and continue your exploration! May we suggest a Trans-Siberian train trip next?