6 Restaurants in Salt Lake City Every Foodie Should Check Out 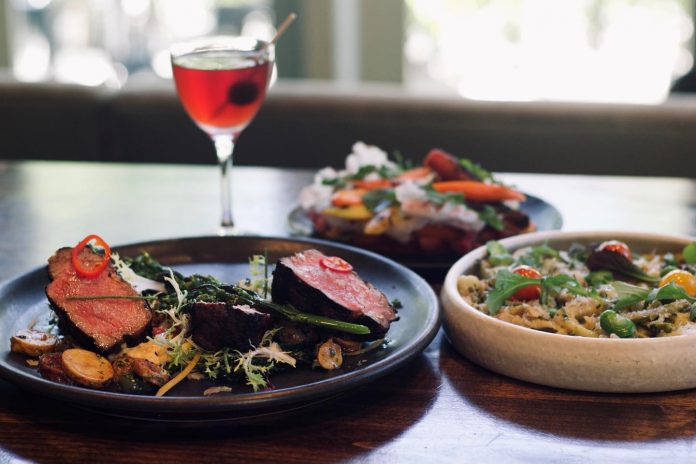 Ruth’s Diner is a Utah classic and grandmother of Salt Lake City diners, offering tasty home-style cooking and an escape from the city. Just a few miles up Emigration Canyon, enjoying brunch on their back patio is one of the best things to do in summer. Every order comes with their famous mile-high biscuit. While weekends can get crowded, we suggest putting down your name and taking a walk through the canyon. Great way to do some sightseeing while working up an appetite!

Red Iguana reigns supreme as the Mexican restaurant in Salt Lake City. A local favorite since the mid-‘80s, this lively restaurant specializes in not just one, but seven different varieties of mole. Not a fan of mole? No problem. They also serve traditional Mexican fare that keep the people coming. Their menu is huge, and they also have the following to match it! Make sure to try their Puntas de Filete a la Norteña, which is the number one best selling item.

For Mod-American cuisine, HSL provides one of the best dining experiences in Salt Lake City. The food is organic and sourced locally, the restaurant is gorgeous, and the service is top notch. But above all, the dishes are absolutely phenomenal. If you’re here for the first time, we highly recommend the cauliflower, general tso’s style. You should also get at least one dish from each section of their menu – cold, hot, hearty and limited. This is the perfect spot for a weekend dinner, family gathering, girls’ night, and just about any occasion that calls for some really yummy food.

Log Haven, long synonymous with wildflowers, waterfalls and fine canyon dining, is one of the top restaurants in Salt Lake City. Located in the Wasatch National Forest, this jaw dropping restaurant has snagged many awards including Best Utah Restaurant and even the coveted Hall of Fame. Log Haven made its mark with creative takes on American cuisine with Asian influences to pure Rocky Mountain style. Expect fresh fish, game and seasonal local ingredients to come together, creating such dishes as rabbit with white-corn polenta or ahi tuna with lime sticky rice and baby bok choy.

Takashi is widely regarded as the best spot for Japanese cuisine in the city. Fish is flown in fresh daily and no matter what you order, be it a traditional roll or chef’s special, expect it to be swoon-worthy. In addition to sushi, Takashi also has soups, small plates, sashimi rolls and dinner entrees. On weekends it might seem like all of the city is here waiting in line, so we’d recommend coming for lunch to avoid the crowd. There are special plates and combos during lunchtime, such as Aki which features maguro sashimi and spicy salmon roll with prawn and vegetable tempura.

The best place for pizza is hands down Settebello, which serves up authentic Neapolitan pizza cooked at nearly 1000 degrees. The pizza has a fluffy crust, tomatoes imported from San Marzano, and toppings so fresh you’ll think you’re in Napoli. If this is your first time here, get the number one selling Margherita. Another one to try is the employees’ favourite Diavola, made with red bell peppers, garlic, fresh mozzarella, and basil. Make sure to leave some room for their homemade gelato too!