HomeSouth Africa6 Safaris in South Africa For Every Type of Traveller 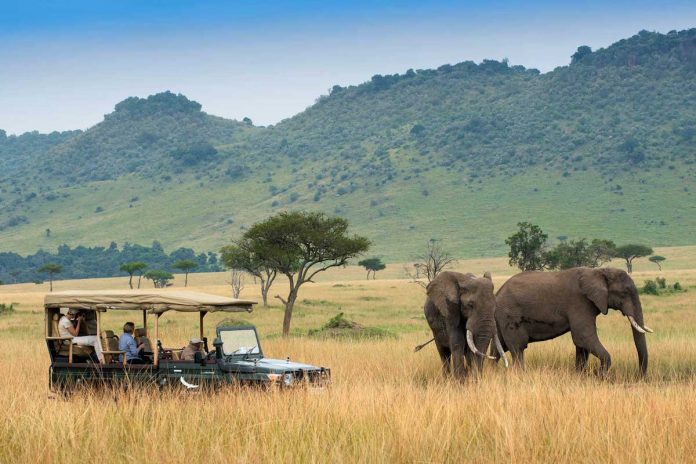 Known for their free-roaming game reserves and safaris, South Africa is where to go to see wildlife up close in their natural habitat. Whether you’re a first-timer or if it’s your third trip to Africa, travelling budget or in luxury, here are six safaris in South Africa to suit every kind of traveller!

As a first-timer, you’re probably looking to catch the ‘Big Five’: lions, leopards, rhinos, elephants and buffalos. You’ll not only have a chance to see all of them at Masai Mara, but also the ‘Big Nine’ which includes the giraffe, zebra, cheetah and hippo. They are all here in their natural habitat, free to roam the vast wilderness for miles on end.

Masai Mara is part of a larger ecosystem which includes the bordering Serengeti National Park, in northern Tanzania. One of the most famous sights here is the ‘Great Migration’, when herds of over a million wildebeest, zebra and other animals including the big cats migrate northwards into Masai Mara from Serengeti National Park. The best time to catch this Neo Geo-worthy scenes are from August through September!

If you’re a budget traveller, a three-day road tour starts from just US$560 for two people (including accommodation!), so you needn’t break the bank in the process. Craving for a more luxurious touch? Masai Mara also caters to that with luxury accommodation options, as well as fly-in safari and hot air balloon tours.

Some people may argue that Kruger National Park is way too touristy now, but at nearly 2 million hectares, there’s more than enough space for everyone. There’s also no denying the wildlife, with the Big Five thriving here, as well as wild dogs, cheetahs, birds and other herbivores.

Kruger National Park is also one of the safaris in South Africa where you can either self-drive or book a package tour. If you choose to self-drive, you will have to book your own accommodation or pitch a tent in one of the park’s fenced camps. Package tours will include return land transfer, accommodation in the park, meals, a guide and safari vehicle. If you’re a first-timer, we’ll suggest booking a package tour. Nothing beats having a knowledgeable guide who’s able to share their expertise and spot animals from far away!

First-timers and budget travellers will probably find this the easiest and most rewarding safari destination. There are lots of companies that do Kruger safari tours from Johannesburg or other smaller towns, such as Wild Wings, Africa Spear and Africa Budget Safari. Do your research to see which ones will be the best fit for you!

So you’ve been there, done that, seen the Big Five and you’re looking for something different. Lower Zambezi National Park is more about quality than quantity. There are no rhinos, wildebeests and giraffes here, but elephant herds, sometimes up to one hundred strong gather in this mesmerizing wilderness. You’ll also find hippos, Nile crocodiles, leopards, lions, buffalos and over 400 bird species.

What’s also special about this national park is that you do a canoe trip on the river, where you might face ten or more hippos, peeking curiously above the water surface. And unlike other parks, this one has no paved roads, so it is unlikely you will encounter another safari vehicle.

The Lower Zambezi has a wide range of accommodation options, but will mostly fit travellers with a mid to high budget.

Want to go into the African bush and encounter wildlife, while backpacking and sleeping out under the stars? Imfolozi Wilderness Trails is perfect for the outdoors enthusiast. This is where conservationist Ian Player developed his wilderness trails concept, encouraging a holistic appreciation of the wild.

There are five different trail options to choose from, where you can sense the presence of a grazing rhino or hear the roar of lions in the night time. Whether you want to get a sense of the wilderness living experience like old explorer days or rest comfortably in a two-bedder tent, there will be a trail option that suits you. They are all conducted by armed and experienced guides and a reasonable degree of fitness is recommended.

Put away your phones (they aren’t allowed on the trails!) and experience freedom from time and deadline constraints. Prices start from R3,981 per person (~S$375), making this ideal for the backpacker or traveller looking to get away from modern comforts. Most trails do require a minimum of four people and can take a maximum of eight.

Wildlife features include large animal herds, particularly of buffaloes, zebras, wildebeest, giraffes, and elephants. The Katuma River teems with hippos and crocodiles. During dry seasons, the mud holes can be packed with hundreds of hippos. You’ll also find carnivorous animals that roam this park such as cheetahs, wild dogs, hyenas, leopards, and lions.

This park is for safari connoisseurs who want to have the place entirely to themselves. Flights to this remote corner of western Tanzania are expensive, and the park’s few accommodations are also pricey.

Liuwa was once the hunting grounds of Lubosi Lewanika, King of Barotseland. Today it is a national park, but so far off the beaten track that getting there is an expedition in itself. The few visitors who make it there find themselves alone in a vast grassland, punctuated by scattered pools and palm stands.

Liuwa’s wildebeest migration is the second largest on the continent. Along with it there are cheetahs, hyaenas, lions, eland, tsessebe and an incredible array of birds. Liuwa was also home to the famous Lady Liuwa, a lioness famous as the sole survivor of poaching activities. Thankfully, reintroduction efforts were successful, and there is now a small but growing pride of lions after her passing in 2017.

Liuwa is open to visitors for most of the year from 1 April to 15 December. Accessing Liuwa during the dry season (June through December) requires a 4×4. Anytime before June, Liuwa is only accessible by plane. There is only one permanent camp, the Time + Tide King Lewanika.

5 Ethical African Safaris to Visit With a Peace of Mind

Volunteer in South Africa With These 5 Programs