HomeChinaQinghai to Tibet Train: Aboard the Highest Railway in the World

Qinghai to Tibet Train: Aboard the Highest Railway in the World 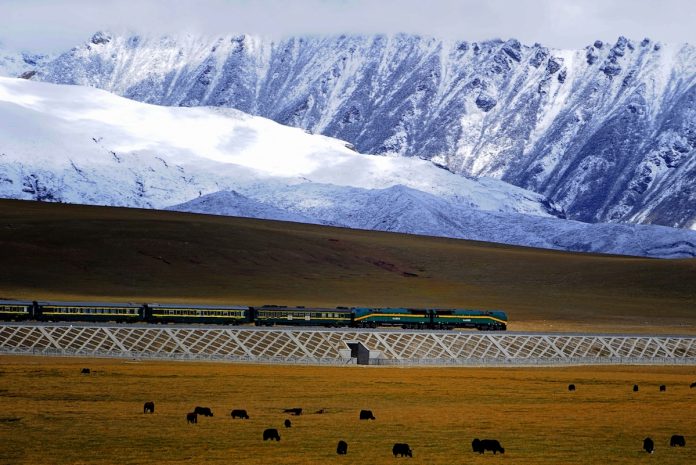 For centuries, Tibet was cut off from the outside world due to its far-flung location and extreme climate. This remote region was inaccessible to travellers and explorers — that is, until the Tibet train came along, which connected it to the rest of China.

A man-made wonder in transportation

More specifically known as the Qinghai-Tibet Railway, the train is an engineering marvel. The Tibet train is also the world’s highest train, reaching altitudes of over 5,000m! It runs for 1,956km from China’s Qinghai province, Xining to Lhasa, through some of the earth’s harshest conditions. This includes earthquake zones and permafrost. Building the Tibet train also came with a unique set of challenges, especially at an altitude where the air has 35 to 40% less oxygen. Dozens of medical facilities and oxygen stations had to be built along the way to alleviate the symptoms of altitude sickness.

From start to end, the entire journey takes about 21 hours and there are multiple trains servicing the route everyday. You can make stops along the way, but this isn’t a spontaneous hop-off and hop-on train journey. You’ll need to plan and book tickets in advance for your Tibet train adventure! However, there are sightseeing stations along the way, where passengers can get off and snap some pictures for the ‘gram.

Qinghai-Tibet railway is undoubtedly one of the world’s most picturesque train journeys. You’ll see the best of what Mother Nature has to offer. Shimmering salt lakes, grasslands, glaciers, peaks, rivers, grasslands and deserts. Here’s what you can expect along the way!

Your Qinghai-Tibet train journey officially begins in Xining, capital of Qinghai province. About an hour after departure you will pass the largest lake in China, Qinghai Lake. It is nearly six times the size of Singapore! It’s not hard to see why views of the lake against a backdrop of mountains draw in tons of visitors each year. If you’re travelling during summer, you’ll also be treated to a bright yellow rapeseed flower field!

Passing Qinghai Lake, you will enter Guanjiaoshan tunnel. At an altitude of 3,690m, this is the highest tunnel on the Qinghai-Tibet Railway from Xining to Golmud. From here on out, you will start to see less and less vegetation, and more golden sands as the train enters the Gobi Desert.

Your first train stop, Golmud, is a city within the desert. Granted, it sits within the Qaidam Basin which is rich in resources. On your train journey, you’ll also see Chaerhan Salt Lake, the largest salt lake in China.

As the train passes Golmud, a breathtaking view of the Kunlun Mountains appear before you. Here, the altitude starts to climb from 2,800m to 4,700m, and the temperature and air pressure drop accordingly. Just like that, you go from the hot arid desert to a cold winter with snow and ice surrounding you. Keep your eyes open – you might see animals on the snow and grasslands!

Yuzhu Peak is the very first sightseeing station, so feel free to get off the train, stretch your legs and snap some photos.

Hoh Xil, which means ‘blue ridges’ in Mongolian, is a plateau between the Kunlun and Tanggula mountain ranges, with an average altitude of 5,000 meters. Apart from being the world’s largest and highest plateau, it is also home to many wildlife, such as the Tibetan antelope and the wild yak. It is an isolated region completely untouched by humans. In fact, entrance is not allowed into the nature reserve without proper authorization from local authorities!

The next highlight is Tanggula Mountains, which is covered in snow all year round. Passing the Tanggula Glacier, you really get a sense of the altitude. At a whopping 5,068m above sea level, Tanggula is home to the world’s highest railway station. It will literally take your breath away — oxygen levels are 60% lower than sea level at this point!

Chugging forward, you’ll pass by Namtso Lake, one out of the three holy lakes in Tibet. In Tibetan, Namtso stands for ‘Heavenly’. It is so blue, the sky seems to merge with it. Every year, many Tibetan pilgrims and tourists will come and do a circuit around the sacred lake. The hundreds of colourful prayer flags attached to the rugged spiked cliffs are quite a sight indeed.

The trains are designed for the harsh climates it passes through. To help alleviate symptoms of high-altitude sickness, trains have an oxygen supply system that increases oxygen in the cabins as the train ascends. Temperature in the train is also regulated, and the windows have a UV coating to protect against the powerful sun rays.

The Qinghai-Tibet trains are relatively clean, comfortable and have a restaurant carriage, toilets (squat and seater), washing facilities and hot water dispensers. There are three different classes of seats:

Cushioned seats, the cheapest, but most crowded and least comfortable for the long-distance journey.

Four bunk beds with soft bedding in private and lockable compartments. In the day, the lower bunk beds can be converted into seats.

No matter which train class you pick, you are in for quite a journey. A Tibet train adventure is unlike any other train journeys in the world. It’s best to book your tickets in advance, from operators such as China Tibet Train Tours or China Highlights. Before you leave, don’t forget that visitors to tibet need to secure a variety of permits prior to travel!