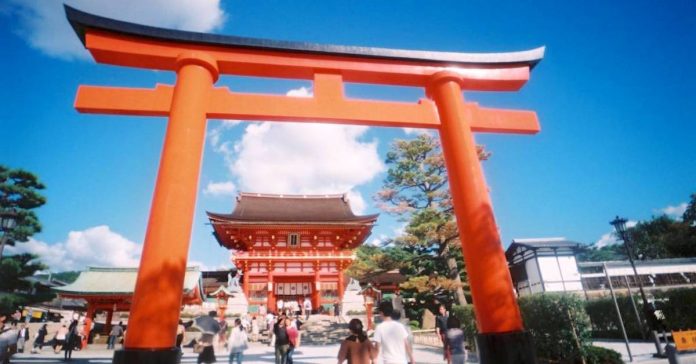 To help you on your trip and narrow down your search, below we share some of the oldest shrines in Kyoto as well as the interesting history behind them.

Along with Shimogamo Shrine (see below), Kamigamo is not just one of the oldest shrines in Kyoto, but also in Japan. Both shrines, known as Kamo-jinja, serve the function of protecting Kyoto from malign influences. The Kamigamo Shrine is dedicated to the kami of thunder, Kamo Wake-ikazuchi.

Together with Shimogamo Shrine, Kamigano is as a UNESCO World Heritage site. Both shrines host the Aoi Matsuri, one of the biggest festivals in Kyoto that has over 1,500 years of history.

Shimogamo Shrine is the older of the Kamo-jinja pair, about 100 years older than Kamigamo. The shrine dates back to the 6th century, centuries before Kyoto became the capital of Japan. It enshrines Tamayori-hime, mother of Kamo Wake-ikazuchi, as well as her father, Kamo Taketsunomi.

The shrine had modest beginnings but rose to prominence quickly when the capital was moved to Kyoto. Emperor Saga designated one of his daughters to be the sai-in (sacred maiden) of Shimogamo Shrine, and every year an elaborate procession would take her to the shrine for purification. This custom evolved into the Aoi Matsuri that we know today.

You’ve definitely seen photos of this shrine in your IG feed, so it should come as no surprise that Fushimi Inari Shrine is the most visited shrine by foreign visitors.

With over 1,300 years of history, the shrine is dedicated to Inari Okami, the kami of rice. People of all ages come here to pray for bountiful harvests, success in business, and wishes and dreams coming true.

But the main highlight of the shrine is the rows of torii gates, known as Senbon Torii. These gates are actually donations! The custom of donating a torii began spreading from the Edo period (1603 – 1868) to have a wish come true or to give thanks for a wish that came true. It is still possible to donate a torii today, but you would need deep pockets for it. The price starts from 400,000 yen (S$5,110) for a small one and goes up to 1,300,000 yen (S$16,610) for the extra large ones!

Built in 656, Yasaka Shrine is located in the geisha district of Gion. The shrine is dedicated to Susanoo as its chief kami, with his consort Kushinadahime on the east, and eight offspring deities on the west. People come here to pray for protection against evil and diseases, business success, love and beauty.

In 869 the mikoshi (divine palanquin) of Gion Shrine was paraded through the streets of Kyoto to ward off an epidemic that hit the city. This was the origin of Gion Matsuri, an annual festival which is now world famous.

Founded in 859, this shrine was built according to an oracle in which Hachiman, the kami of war, expressed desire to be near Kyoto to watch over the city.

But that’s not all! The shrine actually has a surprising connection to the invention of the light bulb. What many don’t know is that filaments for the first light bulb was made using bamboo from the shrine area! You can find a Thomas Edison monument here and the shrine holds two festivals every year in his honor – on the date of his birth and death.

Kiyomizu-dera is one of the oldest historical sites in Kyoto. Along with Fushimi Inari Shrine and Kinkaku-ji, it is one of Kyoto’s most popular tourist sites. You won’t find a single nail in this entire wooden structure! The temple complex also houses other shrines, among them the Jishu Shrine which is popular amongst locals praying for love.

Kiyomizu-dera was founded by Enchin Shonin in 778, a priest who had a vision which led him to Otowa Spring. Beneath the main hall are three streams of water, and each brings a different benefit – health and longevity, success at school or a blessed love life. However, one should only drink from one stream. Drinking from all three is greedy!

With over 1,000 years of history,  patrons come to Imamiya Shrine to pray for good health and protection from epidemics (how relevant to today’s times!)

The shrine also hosts one of the three major festivals in Kyoto, the Yasurai Matsuri. And it houses a rock called ahokashisan, which apparently has magical properties. Locals believe if they use the stone to rub a part of the body that needs healing, they will recover faster. And if a person taps the stone thrice then lifts it, the stone will feel heavy. Afterwards, the same person strokes the stone three times while making a wish. If they lift it again and the stone feels light, then their wish will come true!

Hirano Shrine was established in 794, and it is famous for its sakura cherry blossom trees! A cherry blossom festival takes place here every year. The long history of festivals at the shrine started during the reign of Emperor Kazan, and the Oka-sai is the oldest regularly held festival in Kyoto.

Sadly, the shrine was extensively damaged by Typhoon Jebi on 26 August 2018. It’s haiden (hall of worship) completely collapsed and some trees were damaged, and the shrine is still recovering today.