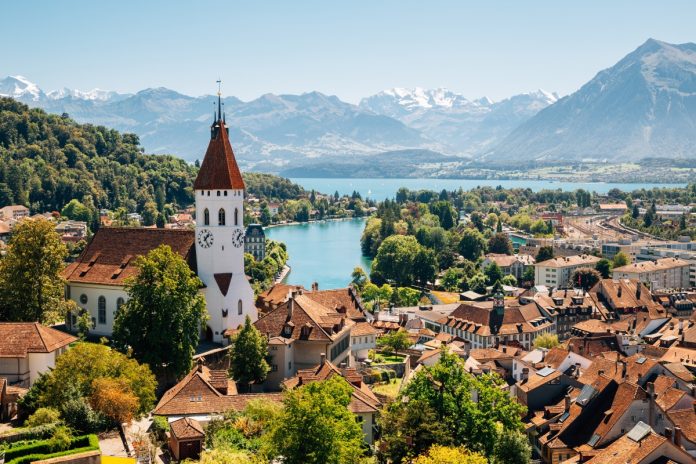 It’s tough picking out the most beautiful cities in Switzerland when the whole country is filled with exceptional beauty. From the majestic alps to pristine lakes, rolling fields and fairytale towns, there are plenty of stunning spots to visit. Even though it is landlocked, Switzerland is undoubtedly one of the most enchanting countries in Europe. Without further ado, here are some of the most beautiful cities in Switzerland you have to see in person. Make sure to get a Swiss Travel Pass – it allows you to take unlimited train rides across the country for a limited time!

Bern may be the Swiss capital, but that doesn’t mean it’s boring. The city dates back to the 12th century, so there’s plenty of history to discover here, especially in the Old Town. The streets and buildings all have a tale to tell, but the most famous landmark here is the Zytglogge (Clock Tower). As you continue to explore the quaint alleys and cobbled streets, you’ll be enchanted by the beautiful structures. And with six kilometres of arcades, Bern is home to the longest covered shopping street in all of Europe! After you’re done shopping, head to the city’s cathedral – Berner Munster – for the most beautiful views over the city.

As one of the most beautiful cities in Switzerland, Geneva is definitely worth a stop. Surrounded by the Alps and Lake Geneva, the city is a beautiful blend of nature and modernity, the old and the new. Get lost in the natural green spaces, hang out by the lake or indulge in some water sports. Explore the Geneva old town, home to many medieval structures, charming cafes and picturesque restaurants. After you’ve had your fill, tour the United Nations building and learn more about the history of the UN and its initiatives. And if you love a good view too, take a cable car ride to the top of Mont Saleve for stunning views of the Alps, Lake Geneva and the city’s skyline!

Zermatt has to be one of the most charming Swiss cities. The resort town is famous for its long ski season, where amateurs and experts alike come to enjoy the thrill of the slopes. Zermatt also sits at the base of the famous Matterhorn, one of Switzerland’s most iconic landmarks. Lifts take you up 3.9km (2.4mi) to give you expansive Alpine views. Within the small city, there are many shopping, bars and restaurants to explore, including the Michelin-starred Ristorante Capri and After Seven. In spring and summer, hiking opportunities abound with 400 km worth of hiking trail network! If you’re a serious hiker, get on the 9.8km Matterhorn Trail, which will take you through rugged Swiss landscapes, alpine forests and flower meadows.

With the Alps and Lake Lucerne as its backdrop, this beautiful city deserves at least a day trip. Check out Chapel Bridge over Reuss River which dates back to the 14th century. You can also take a boat trip on the river to the neighbouring villages that sit at the foot of the mountains. The Musegg Wall borders Lucerne’s old town on the north, and there are other remnants of the city’s military past, such as the Lions Monument. Take a stroll around the stunning Lake Lucerne, especially during sunset for beautiful golden views. If you have more time, you can take day trips from Lucerne to the nearby mountains, such as a cable car ride to the popular Mount Pilatus.

The city of Basel is famous for its museums and being one of the largest cultural centres in the world. Located between Germany and France, the city makes for a great jump off point to either country. But don’t leave without checking out its beautiful medieval buildings and art museums! Kunstmuseum Basel houses the largest and most significant public art collection in Switzerland. If you’re here on a weekend, drop by Marktplatz Square and buy some local goods at the Farmers’ market.

6 Best Places to Visit in Switzerland in Summer

6 Best Things to Do in Zurich, Switzerland

5 Most Majestic Switzerland Mountains to Visit in Person