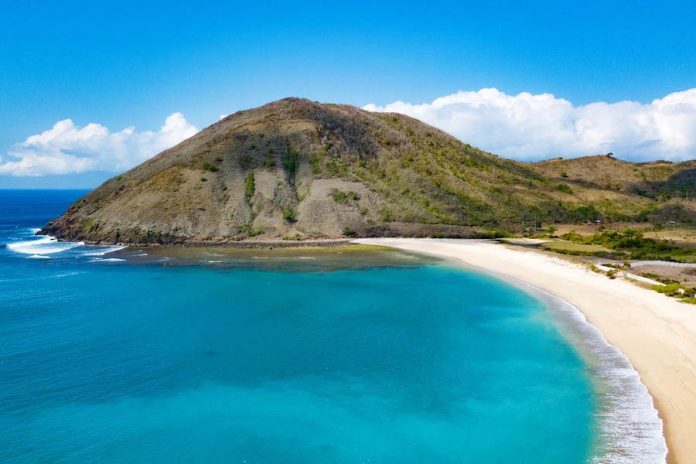 An island next to the famed Island of Gods, Lombok is what you’d imagine an unspoiled Bali to be before the tourism boom. In fact, with its unspoiled beaches and lush forests, Lombok is exactly what many tourists mistakenly imagine Bali to be. Lombok has long been overshadowed by its neighbour, but in recent years there’s been a steady hum drifting into the ears of travellers looking for untouched natural landscapes. With lesser urban developments and large scale hotels, Lombok is definitely worth visiting. We say sooner rather than later! Here’s a guide to Lombok, how to get around the best time to visit and where to go.

Getting there and around

There are many ways to get around in Lombok, including taxis and horse-drawn carriages. However, the most convenient way would be to rent your own scooter. Many hotels and guesthouses can help you arrange for bike rentals. Wear helmets and be careful riding around the island! Although main roads are well paved, the terrains are hilly with winding roads. On smaller roads, they are usually rough and bumpy.

The best time to visit Lombok would be during its dry season between May to September. That said, Lombok’s rainy season is a lot less humid and wet as compared to Bali, making it somewhat appealing as well. Not to be confused with Bali’s Kuta! Lombok’s own Kuta Beach is one the most popular amongst all its beaches. There’s a bit more people here as well as some construction works going on. There are also local touts that can be a bit pushy – women selling sarongs and t-shirts, children selling string bracelets. We were approached so many times that it got a little annoying after awhile! Despite that, Kuta Beach is worth checking out for its seven kilometres of coastline, and surrounding hills that you can climb for a vantage viewpoint. With soft white sand, crystal clear waters and gentle rolling waves, Selong Belanak is a great place to chill out, sunbathe and learn surfing. If surfing isn’t your thing, you can also take a dip and swim here. It is also an ideal spot for watching the sunset with a beer in hand! With the mountainscape in the distance, Selong Belanak truly makes for a beautiful destination. Named after a royal princess of the Sasak tribe, we were pleasantly surprised when we stumbled upon this beach. There was absolutely no one here, and it was like having a private beach all to ourselves! With a swing built in the water, it’s a beautiful place to get that wide angle IG-worthy shot. If you can only visit one beach from this guide to Lombok, we highly recommend this one.

Hiking Mount Rinjani is not for the uninitiated or the faint-hearted, but the journey is one hell of an adventure. Typically, the ascent to the summit takes three to four days and two to three nights on the mountain. If you’re short on time, you can also do a shorter hike to the crater rim which take two days and one night. Read more about our Mount Rinjani guide here!

Maybe you’re not up for strenuous overnight hikes, but still want to get up close to Mount Rinjani? You can do that at Bukit Pergasingan, which offers one of the most beautiful scenery on the whole island of Lombok. Here, you can catch a glimpse of the mighty volcano along with patches of rice paddy fields. No great views come without some effort – you do have to hike for about three to four hours. If you have time to set up camp, you can also catch the sunrise coming up behind Mount Rinjani! How could we leave out waterfalls in our guide to Lombok? Located in Aik Berik Village, it’s about a 10-minute downhill hike to get to Benang Stokel. The roads are paved, so you don’t really need a guide to get here. It’s name translates to ‘a bundle of thread’, and the water do actually look like threads as they make their cascade down! Coming from a river that’s upstream on Mount Rinjani, here you can swim and frolic in a refreshingly cold pool. About one kilometre away from Benang Stokel, Benang Kelambu consists of two to three levels. ‘Kelambu’ stands for curtain, named after the plants that frame the waterfall. You can trek here from Benang Stokel which takes about half an hour, or ride a scooter and get there in less than 10 minutes. There is a man-made pool at Benang Kelambu where you can take a dip in, as well as a ‘curtain’ of water that you can tuck yourself behind! Makes for a very Instagram-worthy photo. No guide to Lombok is complete without a visit to a traditional Sasak village. Sade is the most popular village and a local guide will usually meet you at the carpark. Known for its handicrafts and traditional weaving art, you’ll see souvenirs of all kinds on display. Your guide will take you through parts of its villages, and you will get to see the inside of traditional Sasak houses which  are made of clay and cow dung! (Surprisingly, there were no funky smells.) You can pay the guide any amount that you wish, and at the end of the tour you will be asked to make a donation to the village, although you are not obliged to do so.