How to Pray at Japanese Shrines: 11 Dos & Donts 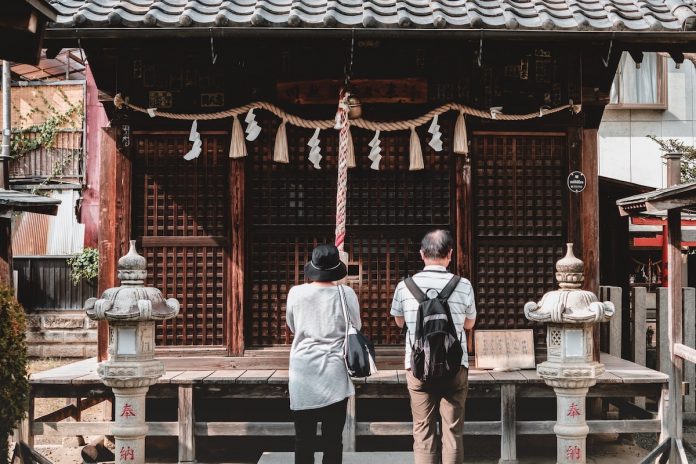 Visiting a Shinto shrine is part of the Japanese experience. However, with all sorts of steps and regional customs, it can feel pretty daunting stepping into a Shinto shrine. After all, as a foreigner, how are you supposed to know what to do? While there are no strict rules, there are general practices and etiquettes, and a routine that works for every shrine you visit. Today, let’s discuss the dos and donts of how to pray at Japanese shrines!

Do: Bow once when you’re passing the torii gate

When you’re visiting a shrine, you enter its grounds by going through a gate, called a torii. This gate marks where the godly realm begins and separates it from the secular world. You can think of a torii as the official entrance to the kami (god)’s home. You are entering a sacred space, so you should show your respect by taking your hat off (if you’re wearing one) and bowing once before passing through.

Don’t: Walk in the middle of the path

Avoid walking in the middle of the path, and keep to the sides instead. The middle is meant for the guardians and deities to pass.

All Japanese shrines have a water fountain known as a temizuya or chōzuya at the front of the shrine. Before proceeding further into the shrine, visitors should cleanse themselves, literally and symbolically. Here there will be a big wooden ladle called hishaku. Pick it up with your right hand, and use it to scoop a ladle full of water. You should try to do this entire ritual with a single scoop of water.

There’s no need to rush – this purification ritual is best performed in a mindful and graceful manner. After you’ve purified both your body and mind, you can continue on to the main hall of the shrine.

Don’t: Return any water to the basin

Any excess water should be poured away by holding the ladle upright. Never return them to the water fountain!

Touching the mouth with the water is a symbolic purification, and you should not drink the water. The wooden ladle should also never touch your mouth!

Do: Ring the bell

The main shrine or honden is where the kami resides. In some Japanese shrines, there is a large bell or gong here. If there is one, you should ring it to let the kami know that you’re here.

Do: Make a small offering

In Japan, an offering to the gods is known as saisen. Traditionally, people would offer five-yen coins. It is a very small amount, but not because they’re scrimping. The Japanese pronunciation for five yen is ‘go-en’ which sounds like the words for ‘good connections’. This wordplay is used to wish for good fortune, good karma, and a good connection with the kami of the shrine.

Put your offering in the box that’s at the front of the main shrine. How much money you put in is up to you. There are no strict rules that say that you have to offer a five-yen coin. Offering 500-yen also does not mean that there is a higher chance of your wishes coming true! If you don’t have any Japanese coins, foreign coins will be fine too. It’s the thought that counts!

You pray and worship at Japanese shrines by bowing deeply twice, clapping twice, and then bowing once more. If you want to pray, do so after your two claps. Join your hands in a prayer position, and convey your prayers quietly through your thoughts. After you’re done praying, bow deeply once more.

This process is known as nirei nihakushu ichirei, which literally means two bows, two claps, and one bow. Remember this combination of two, two, one when visiting other Japanese shrines!

Do: Get an omikuji

Omikuji are fortune-telling papers. The fortunes range from a great blessing (dai-kichi) to a great curse (dai-kyo). Usually for 100 yen, you can purchase an omikuji and read your own fortune regarding matters such as health, business, travel, love and so on. Although they are mostly in Japanese, some shrines also offer English copies of the omikuji as well!

If you get a good fortune reading, keep it with you. But if you get a bad fortune, tie your omikuji to a tree or pole provided by the shrine. By doing so, you are placing your fortune in the hands of the shrine’s kami, so that the effects of the bad fortune can be avoided or lessened.

Do: Bow once more at the torii gate

When it’s time for you to leave the shrine, face towards the main shrine and bow once again. This is to thank the kami for letting you visit their abode.

See? Even though paying a visit to Japanese shrines involves some rituals, they’re not as complicated as you might think. Experiencing these prayer rituals offers a glimpse into ancient Japanese culture and traditions – which are still a big part of life in Japan, even in the 21st century!