HomeAccommodation7 Best Hotels in Tokyo to Splurge On

7 Best Hotels in Tokyo to Splurge On 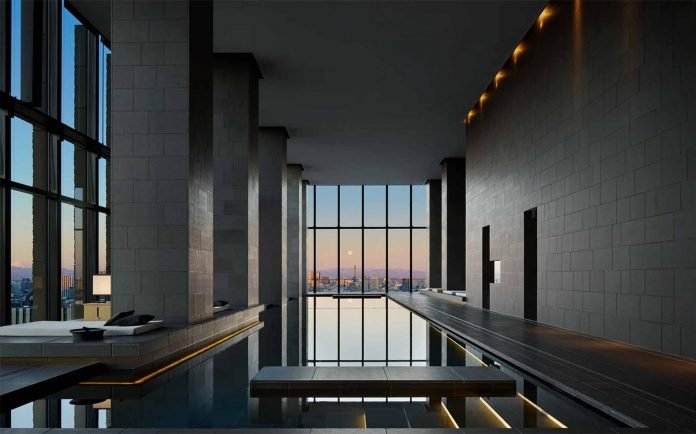 We easily forget that just a few decades ago, finding hotels in Tokyo was like grasping at straws. If you didn’t have a Japanese friend or some understanding of Japanese, forget it. Now with the internet and international brands, there are more great hotels in Tokyo than ever before. From designer boutique hotels to traditional but modern ryokans, here are the best hotels in Tokyo to get you started.

Tokyo isn’t necessarily a city that anyone would describe as “relaxing”, but stepping into Aman Tokyo 34 levels above ground, you are instantly transported into tranquility. Inspired by Japanese design tradition, with ikebana displays, washi paper doors and engawa platforms, the vast lobby, ryokan-style rooms and onsite spa are all among the city’s largest. You can undertake a number of wellness experiences here, from a three-day Misogi Retreat to a one-day wellness program at Aman Spa.

Sitting in the heart of Roppongi and occupying the top nine floors of Tokyo’s second-tallest building, The Ritz-Carlton offers sweeping views across Tokyo. On a clear day, you can see as far as Mount Fuji! Its neighbour is the Tokyo Tower, and you can enjoy it right outside your window when you dine at the Michelin-starred Azure 45. When it comes to the rooms, choose from modern Japanese suites or Western-style rooms, all of which boast beautiful views of the metropolis.

Hoshinoya Tokyo is one of the city’s few luxury ryokan. Despite its city center location, the ryokan feels awfully exclusive and private. With only six rooms on each floor, you will rarely bump into another guest when walking around the halls or getting a snack in the ochanoma lounge. And of course, the big draw is the ryokan’s open air and indoor baths – the water comes from the area’s first natural hot spring!

If you’re a self-confessed shopaholic, the Grand Hyatt is right next to Roppongi Hills, one of Tokyo’s best spots for luxury shopping. And if you’re a wagyu lover you’ll also wanna look here! Keyakizaka works with a farm which grows a special breed of cow with their own feed that you can’t find anywhere else. Grand Hyatt Tokyo might not be the newest, the largest or the glitziest hotel in Tokyo, but it’s definitely one that stands out.

Dubbed Tokyo’s first designer hotel, Andon Ryokan is an East-meets-West take on the traditional ryokan. Once you step inside the modern art-themed hotel, it’s as if the hustle and bustle no longer exists. It is also one of the most affordable hotels in Tokyo on this list The rooms are simple with futons and tatami mats, but incredibly practical. Guests also have access to a stunning rooftop terrace and an expansive bathhouse!

Opposite the Imperial Palace and minutes away from Ginza, The Peninsula Tokyo is one of the best hotels in Tokyo. Commanding views of Tokyo’s skyline, offering sophisticated facilities, extraordinary dining options and great hospitality, all your needs will be well taken care of at this award-winning hotel. Indulge in everything from a heated swimming pool, lavish treatments, Hokkaido scallops and A5 wagyu, all without leaving the property.