HomeIndonesiaWhat It's Like Hiking Mount Batur in Bali, Indonesia

What It’s Like Hiking Mount Batur in Bali, Indonesia 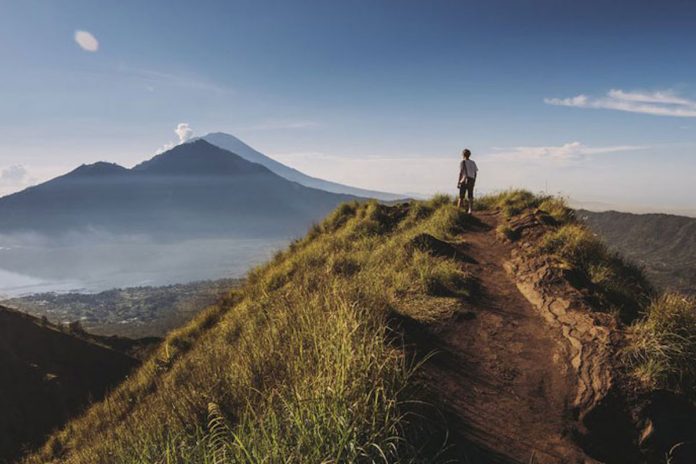 It is the middle of the night. Armed with a headlight, I am hiking Mount Batur and up its steep volcanic rocks in complete darkness. It unnerves me to be doing this, but at least I can’t see how much more I have to go. Despite the fact that I am very short of breath, I keep one foot in front of the other and keep trudging on.

We’re on the way to the peak of Mount Batur. This sunrise hike is very popular amongst tourists in Bali, but at the moment we are the only ones here. Most tourists get picked up at their accommodation between 1 to 2 am and head to the mountain. We’ve started early so that we can set up camp for the night. Having conquered the climb, here’s what it’s like hiking Mount Batur!

All about Mount Batur

Gunung Batur or Mount Batur is an active volcano in the district of Kintamani. Standing at 1,717 metres above sea level, it is the second highest peak in Bali. Over the course of history, the volcano has erupted many times, the last being in 2000.

Most visitors would usually do this hike by hiring a guide, but as one of our friends is an avid hiker familiar with Mount Batur, we went ahead without one. If you are visiting Bali and keen to do this hike, we’ve heard good things about the guides here.

Difficulty wise, while it is taxing, the hike is definitely manageable even for someone of average fitness. You will be wondering why you woke up in the wee hours for this, but you can stop for a break as often as you need. The view at the top will also be worth it!

The terrain is very steep and rocky with loose rocks along the way. We took an hour for the first part of the hike, but expect to take anywhere from 1 to 2 hours depending on your level of fitness. You will then reach a platform area which also doubles as a campsite. This is not the peak yet. From here, the peak is still about half an hour away.

If you’ve chosen to camp and it’s a clear night, there will be thousands of stars to keep you company. We could’ve clocked in some sleep, but it was much too cold (we were unprepared on this front. Lesson learnt!) and the night sky was too beautiful to pass on. At about 5 am, other tourists started to arrive. We packed up and continued the journey upwards.

The second part of the hike involves plenty of loose volcanic sand as well as much more people, making the hike that much more of a challenge. The rocky terrain at the lower elevation was much easier to climb on as it provides a lot more grip. There was a lot more slipping and sliding here. And since we had to follow the speed of the people that were in front of us, it was hard to build up momentum unlike the first part. After about half an hour of hard work, we finally arrived at the top. There were already plenty of other tourists here. While I knew that hiking Mount Batur is a very popular activity, I certainly underestimated the crowd. Despite that, I was more than happy to share the view. Watching the sky turn from a dark inky blue to red, orange and yellow made the journey worthwhile. There is also a small warung here where you can get a hot cup of coffee to warm up and some light bites, including eggs cooked from the volcano steam. There are also local sellers with buckets of drinks going around. If you made a booking with a travel agency, usually your package will include breakfast. Some visitors will choose to take a longer route down by walking around the crater. Expect the descent to be about three hours if you’re going down this way! We chose to descend the same way we came up, which took us about two hours. Watch your step, because the terrain of loose rocks and sand makes it rather slippery. In the light of the day you will be greeted by the beautiful views of Lake Batur, Mount Agung and Mount Gunung. Even if you are not a professional photographer, your pictures will turn out to be beautiful.