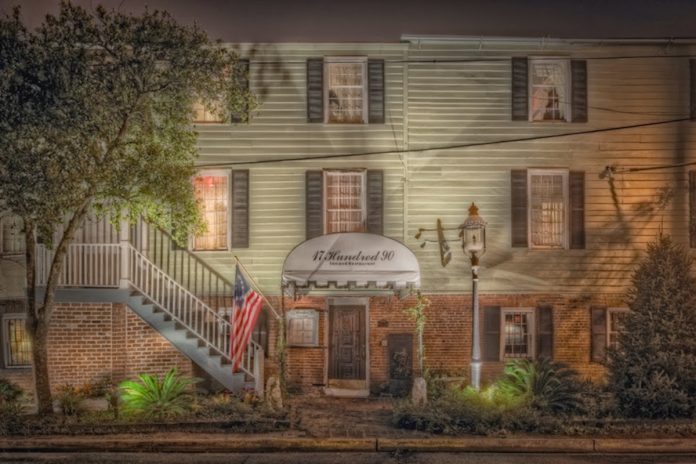 As the oldest city in Georgia, Savannah is also touted as America’s most haunted city. Its hotels are, of course, notorious for activities. From seeing soldiers with missing limbs, to spirits of children running down hallways, there are a myriad of haunted hotels in Savannah where you might run into paranormal beings.

Got chills down your spine? Spending the night with unseen beings isn’t everyone’s cup of tea, so take this as a list of hotels to avoid. On the off chance that you’re a thrillseeker looking for experiences out of the ordinary, then jump headfirst into these haunted hotels in Savannah..

As a former Civil War hospital, no one is surprised to learn that The Marshall House Hotel is one of the most haunted hotels in Savannah. When the establishment was restored in the late 1990s, workers discovered human remains underneath damaged floorboards. Apparently, that area had once been the hospital’s surgery room, leading historians to believe that the bones were from the amputated limbs of Civil War soldiers.

Eerie occurrences are too many to list. They include faucets and electronics that turn on and off, lights that flicker, toilets that overflow for no reason, and disembodied voices echoing through the hallways. Loud noises like a heavy object crashing to the ground come from the fourth floor in the early morning hours. Also, door knobs tend to jiggle like someone is trying to enter the room – not exactly the kind of room service to look forward to.

Built in Columbia Square in 1892, The Kehoe House served as the family home for William Kehoe, Anne Flood and their ten children. Rumor has it that two of them, a pair of twins, died in the home. It remained as the Kehoe family’s residence until the 1930s, and then it was a boarding house and served as the Goette Funeral Home. So no prizes for guessing where its ghostly reputation stems from.

Today, The Kehoe House is a four-star bed-and-breakfast. It is not open to the public for visits and only available for reservations. However, it comes with a host of paranormal reports – sounds of children playing, and the scent of olden day perfume wafting through the hallways and bedrooms. Some guests have even experienced a phantom touch when they’re in bed!

The historic 17Hundred90 Inn dates back to – you guessed it – 1790. With centuries of history, it’s no wonder the establishment has come to be inhabited by some spirits. Anne is the most well-known ghost here, and she is most active in room 204. Guests staying here have reported their items moving from their original places, or even going missing altogether. Unseen forces tugging at bedsheets, scratching noises from the end of the bed are not uncommon. Nobody really knows the true story behind Anne, but rumor says that she was someone who threw herself over the railing of the balcony and onto the courtyard below.

Many ghost tours in the city would also make a stop at the bar at 17Hundred90 Inn, as another presence seems to inhabit the kitchen. This ghost seems much more sinister in nature and occasionally throws pots and spice jars at unsuspecting workers. Apparently the ghost also isn’t too fond of women in the kitchen, and enjoys pulling pranks on them. Staff working into the night at the kitchen and bar have all had unnerving things occur to them.

Once a noble family residence, the Hamilton-Turner Inn stands out with its grand size and style. It was first owned by Samuel Pugh Hamilton, a successful businessman nicknamed ‘The Lord of Lafayette Square’. He used to host lavish parties and even turned his mansion into a private art museum, which he took extraordinary measures to protect. Every night, a guard armed with a rifle would stand guard on the rooftop. Tragedy struck when one day, the guard was found shot in the head, and the killer was never found. No one was willing to take up the job after that, so Hamilton took up the rifle and kept watch himself. Oddly, after several months of doing so, Hamilton himself fell sick and died in 1899.

The house was then sold to Dr Francis Turner, who used the basement as his office. Like Hamilton, he was also a fan of lavish gatherings, and the children would be put upstairs with a billiard table to entertain themselves. Unhappy with this arrangement, one night the children decided to ‘accidentally’ roll billiard balls down the stairs so they could retrieve them and see what the adults were up to. But one of the little girls lost her footing at the top step and fell to her death.

Her ghost is said to haunt the establishment, and billiard balls can be heard from the bedrooms. Others have heard children running about and laughing. Both guests and employees alike have also seen a cigar-smoking, rifle-wielding ghost roaming about the hotel. Is this the ghost of the guard still at his job? Or perhaps the inn’s original owner who is still trying to protect his beloved house?