HomeIreland5 Game of Thrones Ireland Tours For GOT Fans

5 Game of Thrones Ireland Tours For GOT Fans 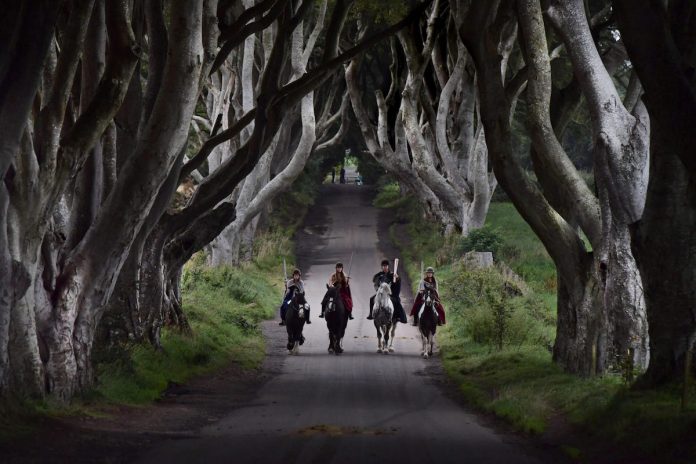 Over the course of its eight seasons, Game of Thrones was filmed in 10 different countries. In Ireland alone, over 25 different places were used to film the iconic series. Missing your dose of Westeros and looking to visit some of its filming locations? Let these Game of Thrones Ireland tours be the inspiration for your next trip!

This tour will take you to the courtyard of Old Castle Ward, the location of Winterfell during the first season where King Robert asks Ned to be the Hand of the King. Explore around the grounds of Castle Ward Estate to other locations such as one of Walder Frey’s Twins, Robb’s camp in the Riverlands and the tree where Brienne dispatched three Stark soldiers.

Next, visit Inch Abbey, where Robb Stark became ‘King in the North’. For full immersion, props for photo taking sessions include Northern wool and leather cloaks, metal swords and hand-painted Stark banners. Finally, this tour will take you into the enchanting depths of Tollymore Forest where the Starks find the direwolf pups, and the Haunted Forest north of the Wall where the Night’s Watch find dismembered bodies in the snow.

This epic full day tour will take you to the Glens of Antrim and the dramatic north coast. Visit epic spots like the cave where Melisandre gives birth to a dark spirit. You will also see Renly’s Camp in the Stormlands and the Iron Islands beach where Theon dedicated himself to the Drowned God. Not forgetting the mysterious Dark Hedges where Arya and Gendry escaped for King’s Landing, as well as the UNESCO World Heritage site of Giant’s Causeway.

The guides on this tour were all extras in the series – Starks, Wildlings and one Ironborn! Expect insider’s and behind-the-scenes stories. Ironborn costumes and props like metal swords, shields and banners will also be available for tour arrives at the location of Lordsport on Pyke island.

One of the most unique Game of Thrones Ireland tours, this is the only tour that will let you meet two of the Starks’ direwolves, Summer and Greywind. GoT Direwolves is a family-run business and everyone has been involved in the filming of Game of Thrones since Season 1. Their Dad was a Dothraki slave master with Khal Drogo!

You will also explore the 800ad ancient ruins of Inch Abbey where Robb was crowned King in the North. Also see one of Ireland’s oldest forests which was the site for the North’s Haunted Forest, and Winterfell’s Wolfwood. After the morning trek, relax and enjoy some quality Irish food and drink in a local restaurant! After meeting the dog actors and one of their owners who featured in the series, you will complete your day at Castle Ward.

From the same pack behind the direwolves tour, this dragon tour will take you to breathtaking filming locations along Ireland’s northern coastline. See the Dark Hedges, where Arya and Gendry hitch a lift on the back of a cart to travel north. Then visit Ballintoy, a picturesque village at the bottom of a winding cliff road. Better known as Pyke Harbour and home of the Greyjoys! Next, we travel to Larrybane Quarry, where Brienne smashes Ser Loras Tyrell into the dust.

After a hearty lunch at the beautiful seaside town of Ballycastle, we visit home of the Targaryens, and the sea cliffs of Dragonstone. Then step into Cushendun Caves where Melisandre births a grim terror for Renly. Your last stop of the day is Carnlough, better known as Braavos, one of the Free Cities where Arya trains to become a Faceless Man.

Explore the real-world Westeros in Northern Ireland. Here, the lush Riverlands lie side by side with the Iron Islands, and the Dothraki Sea is neighbours with Winterfell. Follow the stories of the Seven Kingdoms in this three-day tour.

On day one, transport yourself to Westeros and travel through bewitched forests and ill-fated camps of the Seven Kingdoms. Experience Winterfell in the North, and the azure waters of Castle Stokeworth. On day two you’ll travel from the North, through the Neck and into the turbulent Stormlands. Follow Tyrion and Jorah as they come face to face with the slavers of Essos, visit Pyke where the Greyjoys rule and take yourself down the mighty Kingsroad. Conclude the tour by visiting the coast of Dorne, the beaches of Dragonstone and the lair of a Lannister fugitive!