HomeJapan10 Dos And Don'ts In Japan That Locals Wish You Knew 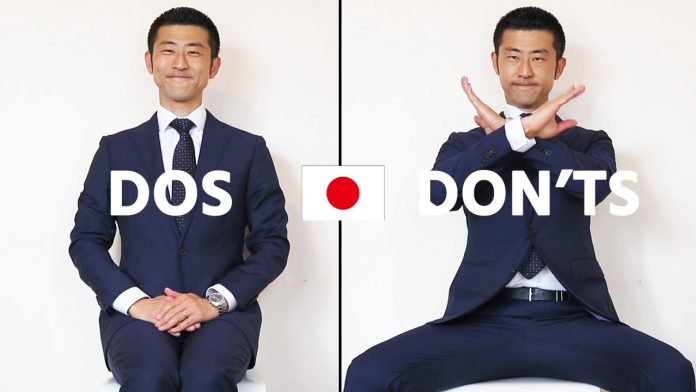 Japanese culture is known for its etiquette and manners. The long list of dos and don’ts in Japan can make it an intimidating country to visit! We hear so many tales about the strict cultural rules and the cringe-y gaijin faux pas foreigners are prone to make.

1) Greet people with a bow

In Japan, it is polite to bow to the other person when you meet them, to say thank you, apologize, or say goodbye. If someone bows to you, lean forward and bow in return. Men should bow with hands at your sides, and women should keep theirs clasped in the lap. And if someone is your senior, make sure you’re bowing lower than them!

There are many complexities to the Japanese culture of bowing, such as how far, how long, and how many times to bow. But as a tourist, you won’t be expected to know more than simple details.

2) Take your shoes off

Especially when entering private homes, temples, traditional accommodations, and even in some restaurants. In places where you are expected to remove your shoes, you will usually see shelves to place your shoes on and oftentimes be given slippers to wear while indoors.

If the accommodation or restaurant has tatami (woven straw mat) floors, you will also need to remove the slippers before stepping in.

If you’ve mastered the art of using chopsticks – that’s great! Here are some additional things to take note of. If you’re sharing a communal dish, do use the opposite end of your chopsticks to take food onto your plate. Chopsticks are only meant for food, so don’t use them to scratch an itch, play air drums or wave them around and point at others.

Also, don’t cross your chopsticks, leave them standing up in your bowl, or use them to ‘hand’ food to someone else’s chopsticks. The latter are related to funeral rituals and very inappropriate at the dining table!

While this is something you should do in all countries, the dining etiquette of finishing all of your food is much more strongly emphasized in Japan. Leaving leftover food is disrespectful towards the chef, and a sign that the food is unsatisfactory. This dining etiquette is strongly related to the Japanese concept of mottainai – the sense of regret at wasting something. So if you can, order moderately. If you have dietary restrictions, let the wait staff know and most restaurants would replace the food item with something else.

5) Keep your voice down

There’s a time and place for being loud in Japan, and that’s usually at a karaoke box or in an izakaya (pub). Anywhere else, you should keep your voice down and your phone on silent mode, especially on public transportation, and public places like shrines and temples, restaurants and cafes, and hot springs. This doesn’t mean you can’t talk in public places, just remember to be mindful of others.

Tipping in Japan is a big no-no. In fact, tipping your waiter, hotel, taxi, etc., is considered insulting, as if you’re looking down on their job. Most likely, they will run after you and chase you down  to return your tip and say, “Sir/madam, you forgot your change!” So when you’re done with your meal, simply thank your waiter, and make your payment without trying to figure out what 15% of ¥3,900 is.

7) Try Not To Touch Anyone

PDA of any kind is very uncommon in Japan. Western norms such as hugging, shoulder slapping or grabbing a friend’s arm can make Japanese people very uncomfortable! So make sure to respect personal space and don’t touch anyone… Unless they invite you to, or if you’re on a crowded train and can’t help being pushed up against another person.

8) Don’t walk around eating or smoking

Snacking while walking around might seem like you’re killing two birds with one stone, but it is actually considered quite rude in Japan. For one, it doesn’t give you the chance to appreciate your food properly. Two, you might accidentally spill your drink or drop your food, creating unnecessary hassle for the road sweepers. Or someone else might accidentally tread upon it and you would’ve ruined someone’s day!

There are some exception to this rule – in Super Nintendo World you can purchase and snack on popcorn!

This concept of being considerate towards others extends towards smoking too. If you’re a Singaporean, you should be familiar with the idea of standing in one spot while smoking. Similarly, there are designated smoking areas in Japan, and you should only smoke in these places.

9) Never blow your nose in public

Long before Covid-19 struck, the Japanese people already had a habit of wearing face masks. Again, this goes back to being considerate towards others and to prevent getting others sick. This brings us to why it’s rude to blow your nose in public. If you find your nose trickling, it’s acceptable to discreetly turn away from the crowd and wipe your nose. If it’s getting too much, find a restroom to blow your nose and dispose the tissues inside.

Japan is a very punctual country, so you disrupt the pedestrians’ flow and mess up the orderliness when you walk on the wrong side. This is especially true on escalators and moving walkways. Make sure to stand on the left and pass on the right (unless you’re in the Kansai region, where it’s the other way round). If you fail to do this, expect Japanese people to be very annoyed at you. You don’t want to be the reason for someone else running late!