HomeDiving6 Most Beautiful Spots for Diving in Sulawesi Indonesia

6 Most Beautiful Spots for Diving in Sulawesi Indonesia 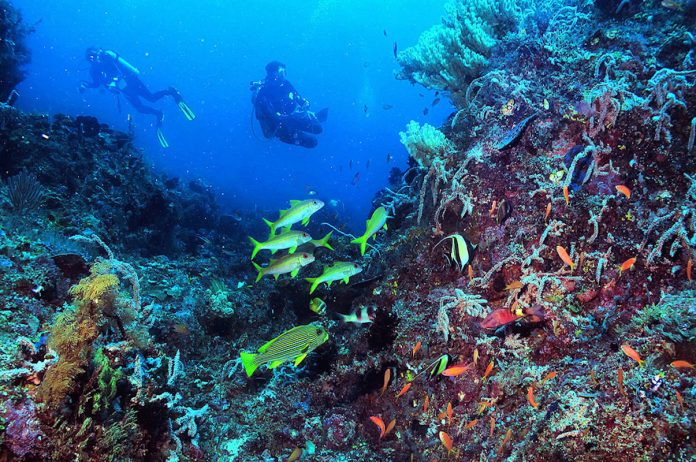 The Indonesia island of Sulawesi offers travellers, and especially divers, a beautiful landscape to explore. With some of the richest underwater ecosystems in Asia, diving in Sulawesi Indonesia offers the sea explorer eye-opening experiences.

There are several dive areas within Sulawesi – Bunaken National Park, Bangka, Lembeh Strait, Wakatobi National Park and more. With so many dive sites, all of them offer a unique experience – from muck diving to fringing reefs, rare sea creatures and dropping walls.

Another great thing about diving in Sulawesi Indonesia is that it is possible all year round. The best diving conditions are during the dry season between April and October. The wet season from November to mid-April brings frequent rains, and sometimes storms can last for days which reduces marine visibility. The only time to consider avoiding is between January to February.

Ready to plan your diving trip yet? Here are the most beautiful spots for diving in Sulawesi Indonesia!

The marine park consists of four islands, and dive sites here mostly consist of steep, dropping walls, but there are also shallow reefs ideal for beginners. Lekuan I & II are hugely popular with their sloping reefs and impressive walls that come with colorful corals and small caves. Mike’s Point offers big-fish action with eagle rays, reef sharks and the occasional large silvertip sharks! Barracuda Point, as its name suggests, often has huge schools of barracuda fish. Siladen is another excellent dive site, especially if you want to see larger inhabitants.

For those just looking for an easy dive, Meras and Celah Celah are great spots and home to many of the area’s special critters such as frogfish, pygmy seahorses and leaf scorpionfish.

There is also a shipwreck within Bunaken known as the Molas. Not much is known about it, except that it sank in 1942, and that it was most likely done intentionally in a case of insurance fraud. The shipwreck is in excellent condition and makes for an interesting dive. But due to its depth, it is a dive site for more experienced divers.

An island group off North Sulawesi, nearly everything can be found at Bangka except for the large pelagics. Inhabitants include the white and black tip reef sharks, sea turtles, blue ring octopus, pygmy seahorses and dugongs. You may even run into dolphins and schools of whales!

Beneath the surface of Bangka Island, you’ll find beautiful soft corals and bountiful marine life. The reef offers shelter to plenty of critters and reef fishes. Barracuda and batfish swim around in the mid-waters, while deeper underwater are schools of tuna and trevally. Talisei is home to a large cavern, and also numerous yellow-lipped sea kraits. Don’t be too surprised if a Napoleon wrasse comes to take a closer look at you! Nearby, Lihaga is great for taking a closer look at smaller critters.

The star of the show at Bangka however, is the Bangka Strait. It is a migratory route for dolphins and at least nine species of whale, including the sperm whale, pilot whale and killer whale. Manta rays are commonly seen here too. Between March and April, August and September are when the gentle giants pass through the strait. But due to strong underwater currents, diving here may not always be possible.

Lembeh Strait is the muck diving capital of the world. Everything weird and wonderful is here, from the mimic octopus to giant nudibranch. And empty of the colourful corals, it is a completely different dive environment. Not being beautiful in the conventional sense is exactly what makes it one of the most beautiful spots for diving in Sulawesi Indonesia.

Hairball, Teluk Kembahu, Nudi Falls and Police Pier are some of the great muck-diving sites. Aer Perang in particular is home to many rare species of octopus. They can be hard to spot, but a knowledgeable guide or sharp-eyed divers would be able to point them out. It is also a great site for night dives!

There are also a few shipwrecks in the area. Bimoli and Mawali are large wrecks from WWII that is now home to a host of marine life. While Kapal Indah, meaning beautiful ship, is a smaller wreck covered in coral.

The volcanic islands at Sangihe are less renowned for diving, but are just as fascinating. There are some unusual dive sites here, including an active volcano and even an underwater village!

Mahengetang is home to Banua Wuhu, an active submarine volcano. Gases intermittently bubble out of the volcano and everything is tinged yellow by volcanic sulphur. You might not expect it, but marine life here is flourishing and mysteriously larger than anywhere else!

If Banua Wuhu is not unusual enough for you, there is also an underwater village in the area. Apparently, there was an earthquake in 1963 and the village was engulfed by the sea. Here you can check out passages and tunnels, doorways and man made structures now adorned by black corals.

Togian Islands is difficult to reach, but very worth it. Protected on almost all sides, the large bay is reputedly the calmest in the world. Its unique geography gives rise to three distinct types of reefs – atolls, a barrier reef and fringing reefs. It is one of the few areas of the world where all three can be found together!

Fascinating dive sites include Batu Gila, a deep, current-swept ridge where sightings of sharks, rays, tuna and barracuda are common. Scalloped hammerheads sometimes pop by too! Dominic Rock is another deep dive with exciting fish action. Around Una Una – an active volcano – life is teeming too with turtles, eagle rays, parrotfish, barracuda, and tons of colourful reef inhabitants.

Pasir Tengah is one of the atolls in Togian Islands, reaching a depth of 400m. The coral walls are spectacular and there is plenty of action away from the reef as well. Taipi Wall is another dive spot with stunning corals, and suitable for less experienced divers.

There is also a wreck of a WWII plane in the Togians. The plane is in great condition, with the cockpit, wings and turret gun all intact. It was crash-landed intentionally while fighting the Japanese as its engine caught fire. The wreck is home to schools of jacks and lionfish, but due to mangrove forests in the area, the visibility can be quite low.

Roma is the most popular dive spot at Wakatobi, and the fringing ring of potato coral is what gives it its name, thanks to its resemblance to the Colosseum in Rome. The Zoo, as its name suggests, is home to a plethora of critters. It is also a favourite spot for night dives where you can see cuttlefish, octopus and lionfish emerge from the darkness. Teluk Maya is a dive site with a fascinating mix of environments. See shallow coral formations around a sandy bay with patches of seagrass, or visit a nearby wall with steep overhangs.

Another favourite amongst visitors, Lorenzo’s Delight has extraordinary coral life. Schools of sweetlips, unicornfish and black snappers navigate the reefs and you can also see larger pelagics like tuna in the blue.