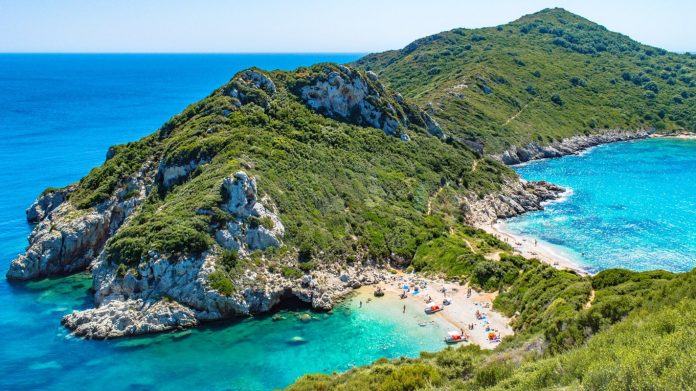 The second-largest Ionian Island, Corfu in Greece boasts of rolling green hills, rugged limestone rock formation, stunning beaches and underwater caves. It captures the hearts of all those who step foot on its grounds. It also comes with a colourful history – the Venetians, French and English have all ruled over the island at some point. As such, you can see their influence in the architecture, attractions and gastronomy of the island. Corfu is the perfect spot for those who want to explore more of Greece, beyond the popular Santorini and Mykonos. Here are the best things to do and see in Corfu, Greece!

The old town is a must-see in Corfu. A UNESCO World Heritage Site, it is full of cobbled alleys and architecture dating from the Venetian period. Among the things to explore here, check out the Old Fortress, the Esplanade and the church of Saint Spyridon, the patron saint of the city. For a more comprehensive understanding of the Old Town, you can join a walking tour, where a knowledgeable local guide will share with you all the secrets of Corfu.

Otherwise known as the Old Fortress, the Palaio Frourio juts out on the eastern side of the island. Before the Venetian era, all the residents of Corfu’s capital resided within the fortress walls. The Venetians largely replaced the fortifications with their own design and separated the promontory from the rest of the city. It proved to be successful, since it managed to protect the city from three major sieges from the Ottoman Empire. Today only parts of the site are accessible to visitors, but you can wander up to the lighthouse for superb views.

A charming fishing village, Kassiopi retains its character despite being extremely popular. Life is laid back, and you’ll find a number of restaurants with great views where you can sit and watch the world go by. Explore its numerous small coves with white pebble beaches and amazing turquoise blue sea. While you’re here, check out Kassiopi Castle, which is probably the best preserved castle in Corfu. Together with Angelokastro Fortress and Gardiki Castle, they were some of the most important defensive structures before the Venetians’ arrival in the 14th century.

At 906 metres above sea level, Mount Pantokrator is Corfu’s highest point. You can drive all the way up, or take a two-hour hike from the village of Perithia. At the top, you can rest and get a drink at the cafe here, then visit the Pantokrator Monastery dedicated to the transfiguration of Christ. And perhaps most importantly of all, take in the sweeping views of the Ionian Islands, the Greek Mainland and Albania. On a clear day, you can even see the southern tip of Italy that’s 130 kilometers away.

On the east coast of Corfu, this neoclassical villa is the birthplace of many royal family members, most notably Prince Philip, the Duke of Edinburgh. It was originally a summer residence for the British Lord High Commissioner, then later granted to the Greek royal family up until 1967, when King Constantine II fled the country. Today, the mansion is open to the public and serves as a museum. There are 14 gallery rooms, and beautiful gardens for strolling through. Some ancient artefacts from archaeological excavations are also on display here.

The Achilleion is a palace built for Empress Elisabeth of Austria, who was staying at Mon Repos and fell in love with Corfu. Deeply saddened by the loss of her only son, the summer palace was her refuge. In later years, it was a military hospital during World War I, then an orphanage, then the Axis powers’ headquarters in World War II. Today there is lots to take in with the extraordinary collection of sculptures and other art pieces, and you can just imagine all the events the palace walls have seen.

For some fun in the sun, La Grotta Beach in Paleokastritsa is a small rocky bay great for swimming and diving. There is a diving board and a jump rock from which you can leap into the sea below. Expectedly, it gets crowded in summer, and getting here takes some effort as you’ll need to climb 142 steps. There is a beach bar here that’s been around since the ‘60s, and even if you don’t hop in the water it’s still a very scenic area.