5 Biggest Night Markets In Taiwan Food Lovers Have To Visit 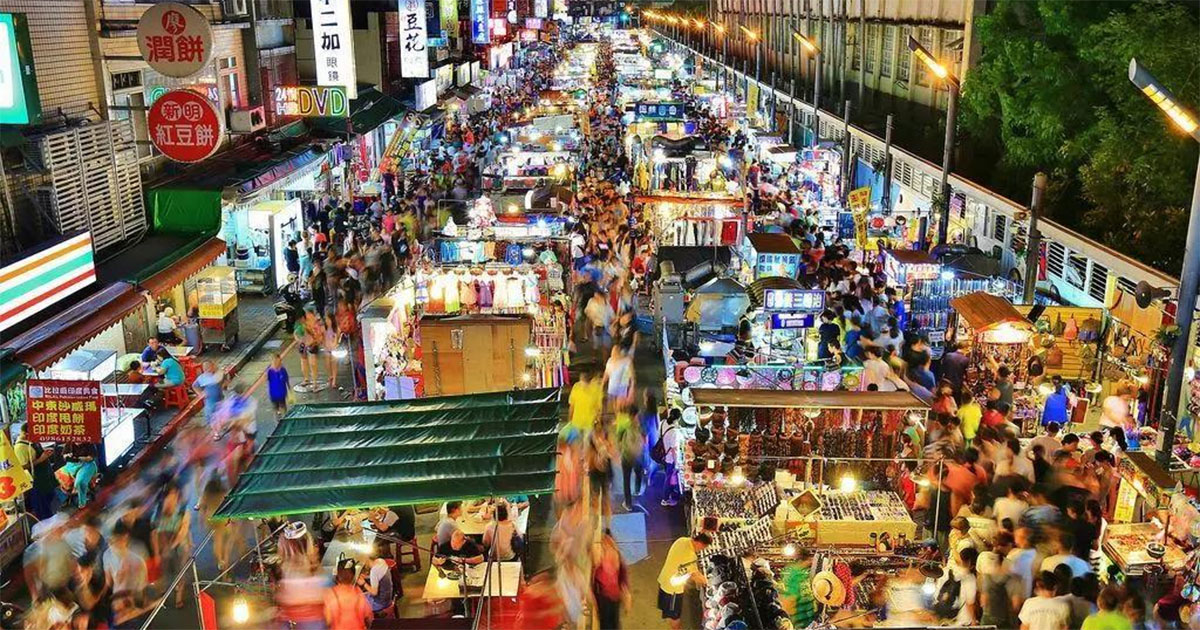 Night markets are a quintessential part of Taiwanese culture. What started off as small gatherings in street corners and temple plazas have grown into some of the most colourful and biggest night markets in Taiwan and around Asia.

You can find a wide selection of trendy apparel, goods and games in the biggest night markets in Taiwan, but they’re most famous for their xiaochi, which literally translates to “small eats”. These dishes are often served as takeaway items, but many vendors put out folding tables and stools for customers to sit and eat too.

With so many night markets in Taiwan, the question you might be wondering is, which is the best one?

The answer is that although they are similar in many ways, all the night markets in Taiwan also have their own unique characteristics and dishes (as well as a lot of the same classics). It really depends on what kind of experience you’re after.

To narrow it down for you, we’ve rounded up 5 of what is considered to be the best and biggest night markets in Taiwan!

First opened in 1899, Shilin Night Market is the OG of night markets in Taipei. It is undoubtedly the largest, most well-known, and most frequented by tourists, not just in the city of Taipei but across Taiwan.

With over 500 food vendors here, you’ll be spoilt for choice. Take your pick from a plethora of local fare such as:

For the adventurous at heart, stinky tofu!

Make sure to also check out Shilin Night Market Food Court, an underground food court that is air-conditioned (a godsend especially in summer). To get there, take Jihe road up the western border of Shilin Night Market, and turn right at the first road going in.

Overall, Shilin has a fun, carnival-like atmosphere with arguably the best mix of food, games, and shopping stalls. For a complete night market experience in Taiwan, you should definitely check out Shilin. Just be prepared to elbow your way through some crowds!

Address: No. 101, Jihe Road, Shilin District, Taipei City
Getting there: Alight at Jiantan MRT station (exit 1), cross the road and enter the market.
Opening hours: 5pm to 1am daily

Although Raohe Night Market only spans 600m along the path of Raohe Street, this night market in Taiwan has a lot to offer. You won’t miss this night market as it’s right next to a magnificent landmark – Songshan Ciyou Temple.

They serve a type of baked pepper bun that originates from the Fuzhou region of China. Bite into their freshly made buns and you’ll understand the secret behind their success – rich and juicy pork filling marinated in a special secret sauce.

You’ll also find many trendy and classic dishes like flame-torched beef cubes, tianbula (Taiwanese tempura), beef noodles, grilled squid, oyster omelette and many more. If you find yourself indulging in too much heaty food, make sure to grab a cup of traditional winter melon tea!

Taiwanese people seem to love to be crowded together. Ningxia Night Market is proof of that, with two rows of stalls creating a very narrow walkway. Forget night shopping here as the main point in this Taiwanese night market is food, so get ready for a gastronomy adventure.

By far the most popular stall in the market, the Michelin-recognized Liu Yu Zai Fried Taro Balls (劉芋仔芋餅) has a line starting before they even open! They only sell two items: taro only balls, and taro balls stuffed with salted egg and pork floss.

Another reason to visit Ningxia Night Market is for the awesome traditional mochi. Most mochi in Taiwan is coated in peanut powder, but the ones at Ningxia are coated with ground sesame seeds too. They are also made the traditional way: boiled right before you eat them so they are warm!

Another interesting thing is that you can have them on shaved ice and doused with sweetened condensed milk. What a heavenly combination!

Address: Ningxia Road, Datong District, Taipei City, Taiwan 103
Getting there: Alight at Zhongshan MRT station and walk 5-10 minutes to the southern end of Ningxia, or from Shuanglian MRT station to the northern end.
Opening hours: 6pm to 12am daily

At first glance, you might not find Tonghua Night Market to be a very “local” Taiwanese night market. But it’s not the vibe or crowd that’s traditional – it’s the food itself. Here you will find classic dishes made from original traditional recipes, the way older Taiwanese folks love and remember them.

Believe it or not, one of the best places in Taipei to get your fix of stinky tofu is right here. Yi Kou Jin Su Stinky Tofu (一口金酥臭豆腐) sits in the center of the market, and their tofu isn’t as pungent as the others out there, so it’s great if you’re a stinky tofu newbie. The pickled cabbage gives a great contrast in flavour too!

You can’t visit a night market in Taiwan without having some lu wei (soy sauce braised stew), and Liang Chi Lu Wei (梁記滷味) is probably one of the best places to try it (the stall made the 2019 Michelin Bib Gourmand List!)

Have it the way you like it – take your pick from a wide array of ingredients like enoki mushroom, cabbage, pork innards and many more!

If after all that savoury food you’re craving for a sweet treat, make sure to pay a visit to Yu Pin Yuan Iced and Hot Tangyuan (御品元冰火湯圓), another Michelin-recognized stall. What’s unique about them is that they serve binghuo tangyuan, glutinous rice balls atop shaved ice. 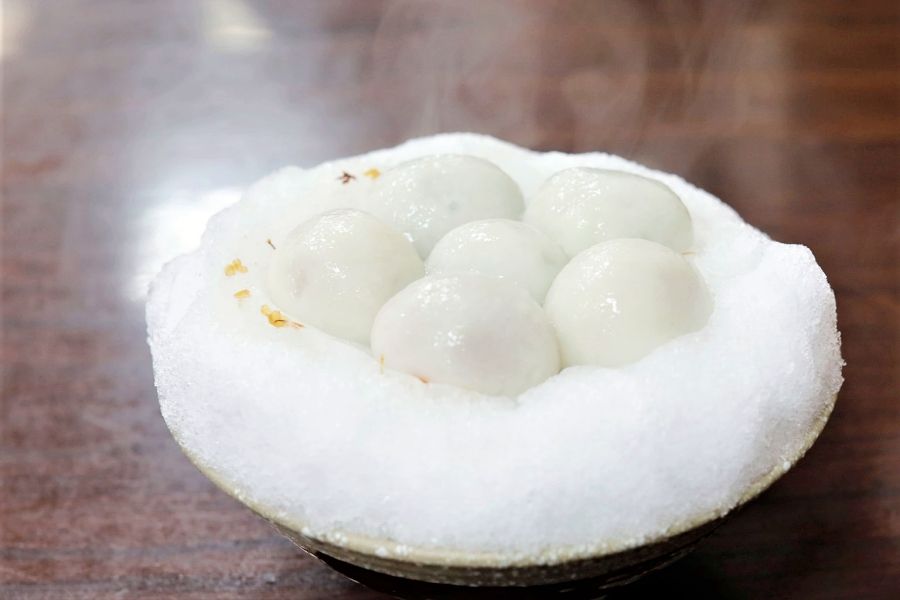 Address: Linjiang Street, Da-an District, Taipei 106
Getting here: Alight at Xinhe Anhe MRT (exit 3 or 4), head east then turn right at Watsons on Tonghua Road. Follow the stream of people to the market entrance on Linjiang Street.
Opening hours: 6pm to 2am daily

With a reputation of being Taipei’s seedy red light district 30 years back, Huaxi Night Market is probably the most infamous night market in Taiwan. It was later known as “Snake Alley” due to the snake meat dishes and snake wine in the market, but you’ll be glad to know that these stalls are no longer around. Today, many vendors specialise in Chinese medicinal soups and wine.

Huaxi Night Market is actually made up of four night market streets that are interconnected and close to each other:

You’ll find street vendors here sitting selling goods like used watches and clothing, along with shops selling Chinese herbs. You won’t be eating much here, but it’s worth checking out for it’s old-school vibes.

This is most like the other four street markets, but less flashy. Instead, it has a nostalgic atmosphere to it.

Thankfully, you won’t see any snakes being slaughtered here anymore. Instead, you’ll find medicinal soups, stews and wine, which the adventurous might be willing to try. There is also a Michelin Bib Gourmand stall here: Hsiao Wang Steamed Minced Pork with Pickles in Broth (小王清湯瓜仔肉). 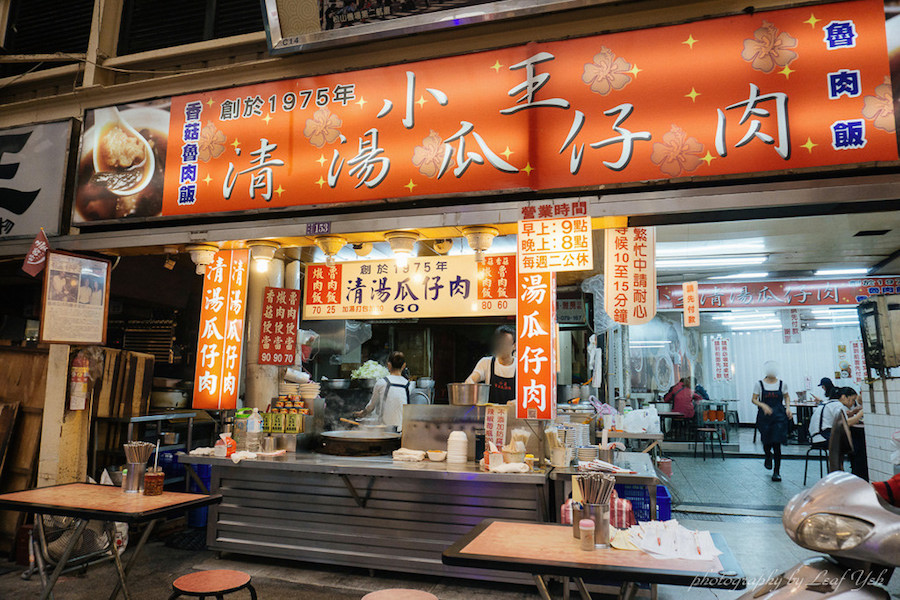 We should also mention that this area is close to the red light district. The women won’t bother you, just don’t wander into the side lanes. And of course, be respectful – no photos of the establishments or women working here.

An extension of Guangzhou Night Market, the specialty here is seafood, cooked in little stalls and served on low tables by the street.

If eating cheap and delicious seafood, drinking beer and sitting by the street in a night market in Taiwan is the experience you’re after, then you’ll be right at home here!

Address: Intersection of Guangzhou Street and Huaxi Street, Wanhua District, Taipei City
Getting here: Longshan Temple MRT (exit 1) is the most convenient for all four night markets. You’ll need to walk past Bangka Park, where groups of local homeless hang out, sleep, and play chess. It’s safe, and there are lots of foot traffic both in the day and night.
Opening hours: 4pm to 12am daily