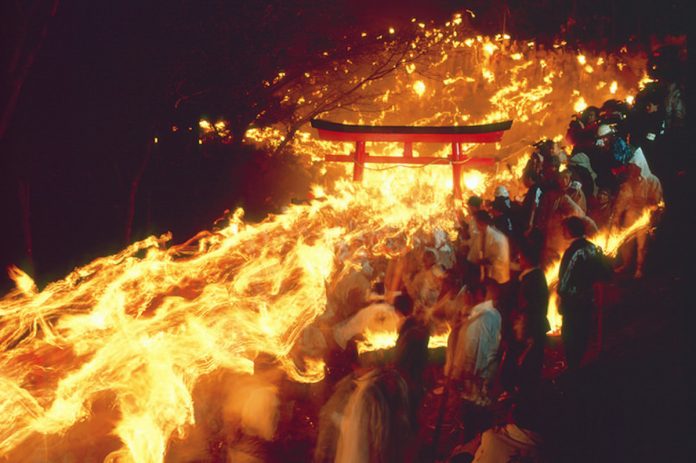 Like many other cultures, the Japanese believe that fire holds sacred powers. Today, there is an exciting variety of fire festivals in Japan that make for incredibly memorable cultural experiences.

The Dōsojin Fire Festival is one of the wildest traditional Shinto celebrations you will find in Japan. Taking place every January 15 in Nozawa Onsen Village, Nagano Prefecture, the festival begins with copious amounts of sake-drinking. Especially important are the village’s 25 and 42-year-old men, as the two ages are “unlucky” in Japanese culture.

As the sun sets, the older men will climb up a large wooden shrine where they will sing chants and shout, while the younger men form a perimeter below. The madness begins when the remaining men attempt to throw flaming torches at the structure and struggle with its “defenders”. The men fight in a drunken fury until the shrine catches fire, and those on it scramble to safety as the shrine goes up in flames.

It looks seemingly chaotic and destructive for a bystander. But this festival actually celebrates the birth of a first child, dispel evil spirits and pray for happy marriages!

Keen to experience one of the biggest fire festivals that Japan has to offer? Then Oniyo Fire Festival is a must-see. Taking place on January 7 at Daizenji Tamataregu Shrine in Kurume, Fukuoka Prefecture, the ceremony has a history of 1,600 years.

Meant to exorcise evil spirits, the festival begins with the fire being lit and closely guarded for seven days. This “devil fire” is then transferred to six enormous torches, each around 13 meters long and weighing 180kg. Hundreds of men dressed in loincloths carry the torches around the shrine’s grounds. After several hours, it is put down at the shrine’s edges.

If you’re worried about the ashes and embers from the torches, it’s actually considered good luck if they fall on you! That said, it’s common to have small holes burnt through on clothes. That might sound a bit bothersome, but think about what it must be like for the festival’s men! Their only source of warmth comes from the torches as they brave the winter’s near freezing temperatures.

Another fire festival steeped in a history of 1,400 years, staging the event every February is the UNESCO World Heritage Site, Kamikura Shrine. A purification ritual with prayers for good harvests, much of the festival remains the same, including a tradition that bars women from the mountain on the day of the festival.

Views of this unique spectacle are possible from the town below and from the path leading to the shrine. You will see around 2,000 men dressed in white as they shout and race down 538 steps with flaming torches lit from a sacred fire. As they jostle with each other to reach the bottom first, the blazing torches seem to ignite the staircase into a cascading river of fire. A local folk song describes the scene as a descending dragon.

The Otō Matsuri is quite a sight to behold and makes for a truly unforgettable experience. It is also one of the few that foreigners (men) can take part!

Taking place every year on the fourth Saturday of January in Nara, the Wakakusa Yamayaki is a very interesting fire festival. After a spectacular bout of fireworks, the grass of Mt. Wakakusa is set on fire, creating an inferno visible from across the city.

Although Wakakusa Yamayaki has been taking place for centuries, its precise origins remain unclear. One theory claims the fire was the result of a dispute between Tōdai-ji Temple and Kōfuku-ji Temple, while another claims that the fire was meant to drive away wild boars and cull insects.

The festival officially begins at noon, where festival-goers can try their hand at a variety of fun events around the base of the mountain. One of the most notable ones is the throwing competition of senbei (rice crackers)! Fireworks go off at dusk, filling the sky with colour before the festival’s finale. It typically takes 30 minutes to one hour for the fire to burn the entirety of the mountain’s grass, but it can take longer if the grass is wet.

The stone staircase that takes visitors to Kumano Nachi Shrine in Wakayama is typically peaceful, except when it’s July 14. On this day, the 12 deities in the shrine visit Nashi Falls, Japan’s highest waterfall and the deities’ former residence. This procession sees male parishioners chanting as they carry 12 flaming torches and navigate the stone steps. Each of these torches represent one of the 12 deities’, and they also purify the path and “burn away” the past year’s sins.

The Nachi Fire Festival is one of the most famous fire festivals in the region, if not the whole country. In 2015, it was also designated as an Important Intangible Folk Cultural Asset by the Japanese Government!