HomeFood10 Cities in the World With the Best Street Food 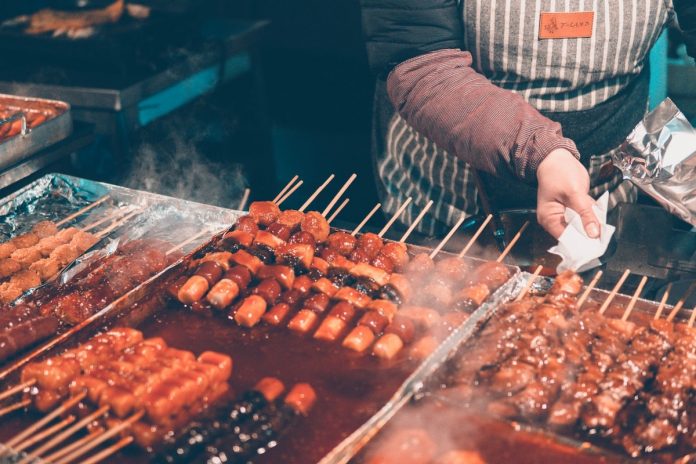 Sometimes the best food isn’t in a Michelin-starred restaurant. It’s by the roadside within mere feet of actual Michelin tyres! No matter the country, street food is the food of the people, and there’s no better way to get to know a country than through the local food. Bringing together personal experiences, fellow travellers’ advice and good ol’ internet research, we’ve put together a ranking of 10 cities with the best street food!

Without a doubt, Bangkok has some of the world’s best street food. Start your culinary journey in Yaowarat, Bangkok’s Chinatown and the birthplace of Thai street food. There you can find stalls serving must-try foods, like Thai-style sukiyaki and thapthim krop, tiny pieces of water chestnuts soaked in grenadine and served with cold coconut milk. There are also plenty of noodles whether they’re in a pad thai or a curry dish. And expect lots of seafood especially shrimp, mussels and other shellfish. For other starters and Thai desserts, enjoy papaya salads, sticky mango rice and pandan cakes. Delicious and diverse, Bangkok street food is second to none!

The cultural diversity of Mumbai reflects in its street food with Muslim, Gujarati, South Indian, Parsi, and Maharashtrian influences. Mumbai’s street food is something that transcends all economic classes, and you can find people from all walks of life eating on the roadside. Some even argue that Mumbai’s street food is better than the restaurants in the city! The list of Mumbai street food to try runs the gamut from sweet to savoury, soft and crispy. The best part? You get to enjoy all these different flavours, colours, and textures without burning a hole in your pocket!

This Asian capital has its fair share of street eats. Unlike other cities on this list, it’s considered poor etiquette in Tokyo to eat while walking. Still, street food is a hit with locals and tourists alike. A go-to treat is takoyaki, which consists of fried balls filled with octopus, green onions and ginger. If you like noodles you’ll definitely dig yakisoba, thick noodles stir-fried with pork, vegetables and a tangy sauce. Other favourites include gyoza, and sweet-savoury dango skewers. At night, take a trip down Tokyo’s alleys to indulge in yakitori and alcohol on the cheap. Tokyo streets are vibrant, and they sure have the food to match it!

This city’s street food is so renowned, it even has its own section in the 2016 Michelin Guide for Hong Kong and Macau! Many snacks here come on skewers, including curry fish balls, squid or octopus tentacles, siew mai dumplings and even deep fried pig intestine. Rice noodle rolls, roasted chestnuts and sweet potatoes are also popular choices. Not to forget stinky tofu, which gets its strong odour from fermentation! If you’re more of a dessert person, you’re in luck too. Red bean pudding, pineapple buns, egg tarts and egg waffles are the ideal treat for any sweet tooth.

Street food is a big part of this city’s identity and economy. Ho Chi Minh street food to try include Vietnamese staples like pho and bánh mì, but also lesser-known dishes. A common street snack for breakfast is bánh cuốn, which is a rolled rice sheet stuffed with pork, shallots and mushrooms. If you’re a fan of seafood, you’ll love bánh xèo, a crepe with shrimp, pork and bean sprouts. tThere’s also the homegrown noodle dish bánh canh, made with rice and tapioca flour. To locals, backpackers and even Principal Skinner, these Vietnamese treats are simply irresistible.

This city state is small but it’s street food scene is far from it. Food stalls in Singapore have been around since the 1800s! Today, they’re mostly organised in clusters called hawker centres serving a slew of tasty treats. For breakfast, try roti prata, a flatbread served with curry or sugar, or kaya toast, named for its thick coconut jam. Unsurprisingly, Singapore also has oodles of noodles. Laksa is rice vermicelli in a spicy broth, and wanton mee features dumplings stuffed with prawns and pork. And of course, no trip in Singapore is complete without Hainanese chicken rice. Often called Singapore’s national dish, it’s fragrant chicken, rice and soup all in one. Singapore is a tiny country, but it’s street food demands a big appetite!

It’s not just Asian cities that have the best street food! If you’re heading to this vacation hot spot, make sure to bring your sunscreen and your appetite. Street food is so popular in Mexico that it has its own name: antojitos, or “little cravings”. Whether you’re craving tamales for breakfast or churros as a midnight snack, you can get a bite at any time of day. Naturally, tacos and quesadillas are aplenty in Mexico City, stuffed with all kinds of meat, seafood and veggies. There’s also the hearty torta sandwich, tostadas and tlacoyos. These dishes can be quite spicy, but tropical fruit juices, mezcal and snow cones make for perfect refreshments!

France and Spain once colonised this North African country, so it’s no surprise that its street food has European, Arab and indigenous Berber influences. One of the most popular places to eat in Marrakech is the Jemaa el-Fnaa square with a myriad of traditional Moroccan food. Crusty bread called khobz is a common snack, as are tagines. A fava bean soup called bissara and a traditional Moroccan soup called harira also make for delicious nutritious meals. If you’re feeling adventurous, you can even eat an entire sheep’s head! For dessert, fried sesame cookies called chebakia are local favourites. Finally, mint tea and freshly squeezed orange juice make for delightful drinks!

This Pacific Northwest city is a food lover’s paradise. With over 600 licensed food carts to choose from you’ll never go hungry. Most of Portland’s food carts are organised in big groups called pods and are incredibly diverse. You can try fish and chips, Korean barbeque, Nutella banana crepes and everything in between! Not sure what to eat first? Portlander faves include Nong’s Khao Man Gai for Thai food, and the Cartopia Pod for late-night eats. Portland’s food carts aren’t only on the street, you can even chow down at the airport almost immediately after you’ve landed!

When you think of Turkish street food, the first thing that comes to mind might be döner kebab. In the city where east meets west, you’ll find these and much more! One of the most common street foods in Istanbul is simit, which is similar to a bagel but Turkish style. Balik ekmek is a wholesome sandwich with grilled fish, onions, tomatoes and lettuce. If you’re more into wraps, try Turkish durum or the tantuni. For something completely different, you could also try kokoreç, the Turkish delicacy made from lamb intestines! For dessert, you’ll love the local Turkish ice cream, all washed down with some pomegranate juice.