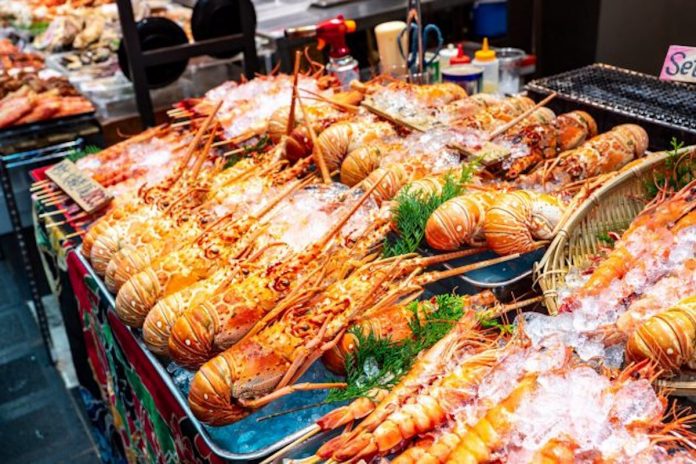 Osaka is a lively city and one of the ultimate food destinations in Japan. You’ll find passionate foodies here and an abundance of Osaka sushi bars and restaurants. With such an abundance of mouth-watering things to eat but a limited stomach space, you should definitely save it for the very best – seafood!

Here are six of the best Osaka sushi bars and restaurants where you can get the freshest seafood cuisines and dishes. Let’s get started!

Sushi and sashimi is the most important food in all of Japan. No self-respecting Japanese food guide would be complete without it! Harukoma Sushi is one of the popular Osaka sushi bars and restaurants with a continual line that never seems to end. Don’t worry – It moves pretty quickly!

Don’t visit Harukoma Sushi expecting a classy ambience with delicate, artisanal sushi. It may look small and calm from the outside, but the space inside is boisterous with ten sushi chefs. This is the place to go to if you want to get full on thick, generous slices of fresh fish. You get great quality for the price you pay!

You’ll find Maguro Kurogin within Kuromon Market in the Minami area. Maguro Kurogin specializes in Pacific bluefin tuna, and you can see them fillet the fish right at the front of the shop.

Here they use the fish entirely, wasting no parts of it. Take your pick from the different parts of tuna: akami (lean tuna) which has very little fat content, otoro (fatty tuna) for a melt-in-your-mouth texture, chutoro (medium-fat tuna) which is between akami and otoro, or the premium kamatoro (fatty tuna from the collar bone). Only two servings are available per fish!

Enjoy your choice(s) of tuna in sushi, sashimi or in a sushi bowl form.

Walk north from Maguro-ya Kurogin and you will come to Kushisei, a shop that specializes in grilled seafood. There is a perpetual crowd that’s gathered here, no doubt drawn in by the large lobsters, king crabs and variety of seafood that’s on display at the front of the shop.

Seeing all these fresh seafood is sure to stir up an appetite! Choose your favorite ones and have them grilled on the spot. There is a small space where you can sit and enjoy your order, while watching the staff expertly grill up the different kinds of seafood.

Izakaya Toyo is an outdoor izakaya in Miyakojima named after its owner, Toyo-san. They were both featured on the Japan episode of Street Food on Netflix!

Izakaya Toyo specializes in seafood that is served either completely raw or aggressively blowtorched. While he doesn’t claim to be a master, Toyo-san is somewhat of a local celebrity for his jovial personality and the carefree manner he blowtorches his food. He torches them with one hand, while the other dips into a bucket of ice and dabs the food to keep it from drying out. All while the blowtorch is still on.

It’s a wonder how he does it. Maybe his hands are made of fireproof leather!

If you want the best tables in the house, come early before their opening. The izakaya is very popular amongst locals and tourists and they fill up soon after opening. There is also a perpetual line which rarely lets up throughout the day.

Osaka’s best-known crab specialist restaurant, it’s hard to miss the giant mechanical crab display above the door. While Kani Doraku restaurants can be found all over Japan, its flagship store on Dotonbori in Osaka is undoubtedly the most famous one.

The restaurant offers every crab in every way you could possibly dream of. From whole crabs to set menus, crab sashimi, sushi or crab steamed, grilled, tempura or hotpot. Something to take note of is that the lunchtime sets are cheaper than in the evening, with prices starting from ¥2,000 yen at lunch and ¥6,000 yen for dinner.

Hamafuji in Kuromon Market is an iconic restaurant with over 90 years of history. They specialize in fugu, or pufferfish. The chef makes a pufferfish soup using a proudly honed technique that gives a flavor that can only be savoured here. They’re especially great on a cold day in winter!

Your fugu hotpot will come with vegetables and include the skin, bones, and meat of the pufferfish, in line with the mottainai way of life. When you’re done with your hotpot, your server will bring you a bowl of porridge with egg, nori (seaweed), and spring onion, which has a delicate taste brimming with the flavor of the original fugu soup. Another dish that’s a must-try here is fugu sashimi, which is sliced into transparent thin strips and has a very different texture from normal fish.