7 Attractions At Super Nintendo World Japan To Look Forward To 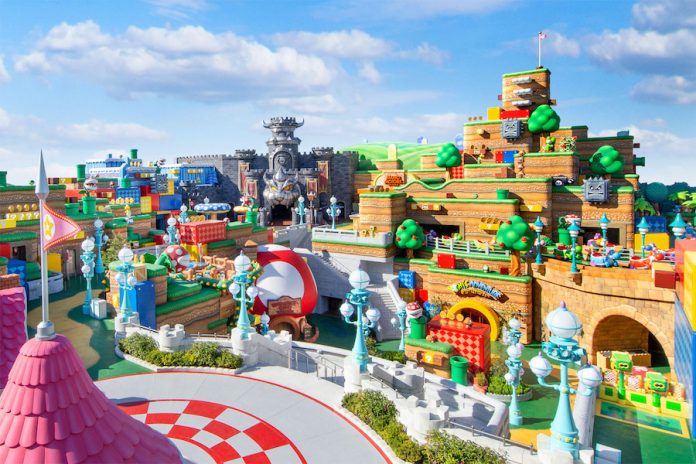 The highly anticipated Super Nintendo World Japan may have been delayed due to Covid-19, but that hasn’t stopped Universal Studios Japan from holding soft openings to some lucky fans and guests.

Located in Osaka, the theme park is bringing to life the worlds, characters and games that we all know and love. Super Nintendo World Japan will feature attractions like Mario Kart, Yoshi-themed rides, restaurants, shops and other experiences. What exactly can you look forward to in this interactive theme park? Read on to find out more about Super Nintendo World Japan.

The iconic Mario Kart has been brought to life with cutting-edge technology in augmented reality and projection mapping. Make your way through Bowser’s Castle and expect to be wow-ed as you race your way to victory.

Each cart will seat four passengers and while you won’t actually be steering it, you will need to grab Koopa shells from item blocks and fling them at enemies. How well you do will determine whether you win or lose the race!

2) Go on an adventure with Yoshi

Hang on to Yoshi as you search for Captain Toad on a treasure hunt! You’ll get a spectacular view of the Mushroom Kingdom from Mount Beanpole while having fun on this ride that’s perfect for the whole family, even young kids.

3) Collect coins with a Power-Up Band

Unlike other theme parks, the whole of Super Nintendo World is a highly interactive game. You’ll want to get a Power Up Band (¥3,200), which will allow you to virtually collect coins throughout the park.

Just like in the Super Mario games, you can get coins by punching blocks and defeating enemies. Download and link it to the park’s official app, so you can keep track of your coins and compete with others to collect the most.

The Golden Mushroom has been stolen by Bowser Jr.! Play interactive games and face off Bowser Jr.’s minions to collect three keys to infiltrate their lair. Your final challenge is a boss battle with Bowser Jr. Can you defeat the Mushroom Kingdom’s most devious trickster?

5) Meet Mario, Luigi, Peach, and other friends from the Mushroom Kingdom

Meet the talking Mario, Luigi and Peach only at the Super Nintendo World. Capture a fun photo with Mario and Luigi to remember your visit, and get your picture taken with the lovely Princess Peach and her majestic castle.

6) Power up with some food

Tired from running around and collecting coins? When you need a break, get a power up at Kinopio’s Cafe (Kinopio is Toad’s Japanese name).

The largest restaurant in all of Universal Studios Japan, you’ll find themed dishes such as the Mario’s Bacon Cheeseburger, Piranha Plant Caprese, and even a Question Mark Block Tiramisu, all made by Chef Toad!

If you just need a small refuel, there are also places to get small snacks. At Pit Stop Popcorn you can get Caramel Peach or Mushroom popcorn in special buckets shaped like a Super Star, or a Mario Kart. Or hop over to Yoshi’s Snack Island™ after your journey on Yoshi’s back for some small bites shaped like Green Shells!

7) Dress up as your favourite character and shop for souvenirs

The 1UP Factory™, designed to look like a toy shop inside the Mushroom Kingdom, is stocked with shirts, gloves, glasses and hats that will help you look the part while you explore the park.

Browse a complete lineup of wearable merchandise to complement your experience at Super Nintendo World. Here you can be anyone you like – Mario, Luigi, Yoshi, Bowser, or even Goomba!

And of course, who can leave a theme park without some souvenirs? Make your way to Mario Motors™ and shop for exclusive merchandise that you can go on to bring home for your family and friends.

We know that most of us will not be able to travel to Japan just yet – hang in there! In the meantime, make sure to check out this interactive map, as well as this virtual tour led by the legendary Nintendo game designer and creator of Mario, Shigeru Miyamoto.