HomeFoodAll About Kazakh Cuisine and 8 Dishes You Must Try

All About Kazakh Cuisine and 8 Dishes You Must Try 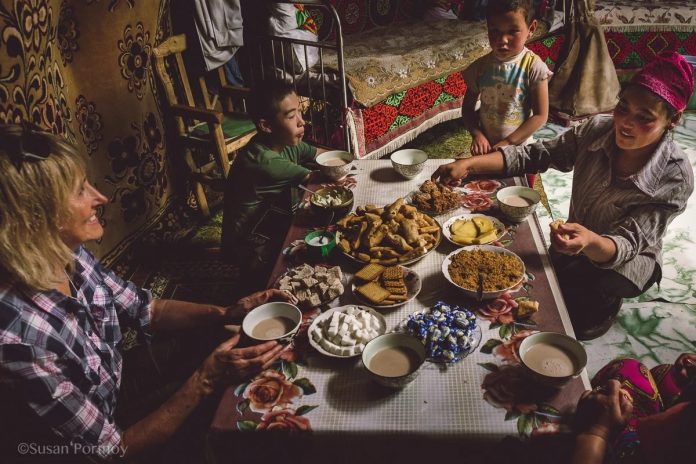 As one of six Turkic countries in the world, Kazakhstan shares similar languages, customs and religion with its neighbouring countries. Unsurprisingly, they have also adopted some peculiarities found in their cuisines. Yet at the same time, Kazakh cuisine has also developed its own identity. Because of their nomadic culture, food is mainly centered on meat, such as lamb, beef and even horse. As a Muslim-majority country, Kazakhs do not eat pork. Traditional cooking techniques are also aimed at long-term preservation of food. Think aging meat so that it will last through winter, and making fermented milk, as it is easier to store.

In addition to their nomadic way of life, other countries and ethnic groups also have a large influence on Kazakh cuisine. These include Russians, Tatars, Ukrainians, Uzbeks, Germans, Uyghurs, Koreans, and many more. Although traditional Kazakh cuisine is mainly based on meat and dairy products, more recently, vegetables, fish and seafood, baked dishes, and sweets have also been added to Kazakh cuisine.

A big part of Kazakh cuisine is also tea. Black tea was introduced from China after the establishment of the Silk Road. It was traditionally consumed with sweets after the main course, but now it has virtually replaced other traditional drinks and every meal comes with tea. This makes Kazakhstan one of the largest tea-consuming countries. Kazakhs drink on average 1.54 kilograms of tea per person each year. In comparison, tea consumption in India is 650 grams per person. Kazakh tea is typically strong black tea with milk and cream. It’s delicious, but perhaps not so good for those on a diet!

So if you’re visiting Kazakhstan or wanting to explore Kazakh cuisine in your city, what are the dishes that you should try? Here are eight must-trys!

Beshbarmak is Kazakhstan’s national dish. Its translation means ‘five fingers’, as the dish is traditionally eaten using your hands. Boiled meat such as horse, mutton, beef, or a combination of them are served along thin noodles sheets. The dish is then combined with a flavorful meat broth called sorpa. Nowadays, there are different versions of beshbarmak, and consuming the dish is often a ritualized event. For example, the boiled meat is served by the host in order of the guests’ importance based on their gender, rank, and age in the social structure.

Kazy is a horsemeat sausage common in other Central Asian countries such as Uzbekistan and Kyrgyzstan too. Traditionally, the sausage is made with meat from the ribs. Salt, pepper and garlic are added to it before it is left tied in a cloth for two to three hours. Then, the intestines are filled with the meat and the two ends are tied. After this preparation, the kazy can either be smoked for over 12 hours, or dried outdoors for a week in direct sunlight and wind. Before serving, the kazy is cooked in boiling water. Although it is usually enjoyed as an appetizer, kazy can also be incorporated into other dishes, such as beshbarmak.

Baursak is a delicious puffy fried bread consisting of flour, milk, salt, sugar, eggs, butter, and yeast. It is traditionally served on special occasions such as weddings, birthdays and also memorials. It is said that the smell of the oil and the frying baursak floats high into the sky, so that the dearly departed can enjoy them too. For the living, baursak is commonly eaten on its own or with sugar, butter, jam, or honey. Some people like to dip it in tea too. Fun fact: the largest baursak was made in Russia in 2014, weighing 179 kilograms!

It seems like every culture has their own version of dumplings, and in Kazakh cuisine, they are called manti. A very popular Kazakh dish, manti is a mixture of ground lamb or beef with spices and wrapped in a dough wrapper. It is steamed then served topped with butter, sour cream, or onion sauce. They are very common as street food too!

Shubat is fermented camel milk. It is typically prepared by first souring camel milk in a skin bag or ceramic jar by adding previously soured milk. Over three to four days, fresh milk is mixed in and the end result is a sparkling white beverage with a sour flavor. In the summer, shubat is one of the staple drinks of the Adai Kazakhs. Due to its preparation steps and perishable nature, shubat is hard to export. Therefore, it’s unlikely that you will find this in your home city, but it’s a  must-try when in Kazakhstan!

Koktal is a more modern dish in Kazakh cuisine. It is made with freshwater carp from the Caspian Sea, and the dish is popular in the south and along the coastline. Koktal is most often prepared by baking the fish with tomatoes, sweet peppers and onions in a special iron smoker called a koktal box. Patience is needed because cooking the fish is done slowly – but worth the wait!

Many cultures have their own version of pilaf, and Kazakhstan is no exception. Meat is fried together with carrots, onions, garlic, and rice. As the dish is a symbol of wealth and prosperity, you’ll often find it as a centerpiece at festive tables. It is a must-have at joyous occasions that are meant to bring success and happiness, such as weddings.

Shelpek is another pastry dish and a traditional Kazakh flatbread. Flour, milk, sugar, butter, sour cream, baking soda, salt and vegetable oil are combined to form a dough. Once done, the dough is divided, rolled into a thin circle and fried until golden brown. Shelpek is especially significant on Fridays, the holiest day of the week for Muslims. They are prepared to honor the memory of the deceased. Once done, these flatbreads are served with cheese, jam, or sour cream along with a cup of tea.