HomeFood8 Vietnamese Desserts You Have to Try in Vietnam

8 Vietnamese Desserts You Have to Try in Vietnam 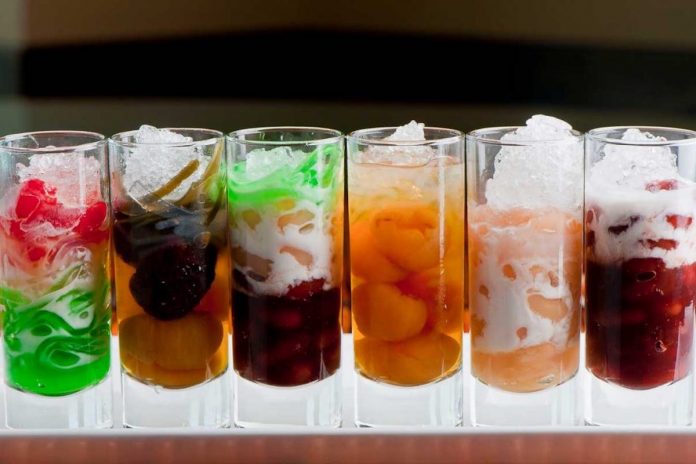 From comforting bowls of pho to delicious banh mi, Vietnamese food is a favourite for many people. However, Vietnamese desserts tend to fly under the radar, even though they deserve a spotlight! In Vietnam, desserts can take on many forms: jellies, puddings, sweet cakes, soups and more. Without further ado, let’s delve into the sweet world of Vietnamese desserts, and check out which are the ones you have to try!

Chewy, glutinous rice balls are stuffed with mung bean paste and cooked in a fragrant ginger syrup. It is similar to the Chinese tangyuan, except that they are usually stuffed with peanut or sesame paste instead. Chè trôi nước is usually also topped with sesame seeds and coconut milk. This dessert is often eaten on a child’s first birthday and other traditional holidays such as Lunar New Year or more recently, the Cold Food Festival.

On a hot day, you can’t go wrong with chè ba màu. It is a refreshing dessert of ice slush, mung beans and jelly bites, topped with a generous amount of coconut cream. A treat for the eyes and the taste buds, it comes in a tall glass with a straw and spoon for you to stir it all up, and the different textures and flavours go beautifully together. This is one of the most popular Vietnamese desserts and you can find it in many street stalls or food markets.

This Vietnamese pudding consists of just four ingredients: sweet corn, glutinous rice, and coconut milk topped with sesame seeds. It’s a simple dessert but wonderfully satisfying and filling. They’re best during the harvest season from March to September. This is when the local corn is the freshest and sweetest!

For something more modern, Bánh flan is the Vietnamese version of the classic French crème caramel. The variations here include serving the crème caramel with black coffee poured over the top. Some places also brown the caramel past the typical caramelization point to create a darker, more bitter burnt caramel.

Chè chuối is one of our favourite Vietnamese desserts. It is a sweet soup made of bananas, sago pearls, nuts and sesame seeds in coconut milk. Much of its sweetness comes from the type of banana used. Chuối sứ is a banana native to Southeast Asia. It is smaller, sweeter and more flavourful than its other counterparts. If you have a sweet tooth, chè chuối is one of the Vietnamese desserts you must try!

If you like savoury and sweet, bánh rán is a deep-fried glutinous rice ball treat from northern Vietnam. Its outer shell is made from glutinous rice flour and covered with white sesame seeds. Its filling is made from mung bean paste scented with a little jasmine flower essence. Traditionally, the filling and the shell are separated, so that if you shake the bánh rán, you can feel the filling rattle inside of the shell!

Bánh bò is a sweet, chewy sponge cake made from rice flour, water, sugar, and yeast. It has a honeycomb-like appearance on the inside due to the numerous small air bubbles in the batter. There are different varieties of bánh bò depending on the shape, ingredients, and method of preparation, but all of them have a distinct, spongy and airy texture.

How can we leave out the famous Vietnamese coffee? A popular way to drink Vietnamese coffee is iced coffee with sweetened condensed milk. It is known for being intensely strong and sweet, a sure way to dissolve your morning daze and afternoon lulls. Another variation is the egg coffee called cà phê trứng. It is made with coffee, an egg yolk and condensed milk. It is said to taste similar to tiramisu and eggnog!