HomeFrance8 Best Spots For A Romantic Honeymoon Photoshoot In Paris

8 Best Spots For A Romantic Honeymoon Photoshoot In Paris 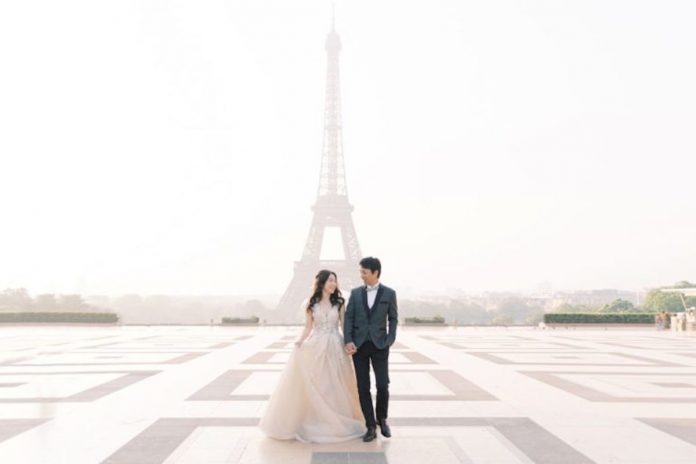 There are a few things to have in mind when choosing your locations for your honeymoon photoshoot in Paris. Such as the look and feel of the city, as it changes every season. Even more, depending on the time of the day, the light and sights are also different.

For more inspiration on wedding or honeymoon shoot ideas, make sure to check out our photography page!

Probably the most beautiful bridge in Paris. The Pont Alexandre III offers a stunning view over the Seine River and the Eiffel Tower. It works well for both daytime and nighttime photos.

But do keep in mind that there are usually more people in the afternoon and evening as the bridge is a prime spot to catch a Parisian sunset. But with some creativity in camera angles, it’s a great time to capture some creative silhouettes!

The Trocadéro is an ideal place for an iconic honeymoon photoshoot in Paris, with the Eiffel Tower standing majestically in the background. Here, the light is beautiful in the daytime, but during winter months, the sun rises from behind the Tower which creates a very flattering backlight.

As one of the most iconic spots in Paris, it is also one of the busiest places in the city where people gather to watch the sunset and the Eiffel Tower light up. So if you prefer to capture sunset photos, they can usually only be taken during the low season between October and April.

The Palais Royal is a former royal palace just dripping with Parisian elegance with its architecture, tall columns and a beautiful garden.

As one of the best places to take pictures in Paris, it’s best to get your photos early as the Palais Royal gets crowded around 9am, when the French people start their work day. No matter the season, whether rain or shine, the beauty of the Palais Royal is unrivalled.

For a hip vibe and to add a colourful splash to your photos, Rue Crémieux is fast becoming the most Instagrammable street in Paris. It’s not hard to see why. Rue Crémieux is paved with setts and lined with pretty houses painted in every shade of the rainbow.

As this is a residential estate, do be mindful of the residents here and try to conduct your photoshoot in a way that is least intrusive as possible!

After the Eiffel Tower, the Louvre Museum is the next most popular location for a honeymoon photoshoot in Paris. The exquisite architecture offers elegant backdrops, while the Louvre Pyramid adds a modern twist to your photos.

As one of the most popular places in Paris, the Louvre gets crowded fast. Sunrise or night time is the best time to be there, and it is beautiful in every season.

Along with the Luxembourg Gardens, Tuileries Garden is one of the most beautiful parks in Paris. Best at opening time in the morning or late in the afternoon, where the light filters through the garden towards the Louvre, making a great backdrop for your photos. Because the Tuileries Garden is so close to the Louvre, it is easy to combine these locations.

Looking for a photo location with a village atmosphere in an older part of Paris? You’ll find Montmartre on a mountain with an amazing view over Paris.

With its cobblestone streets, stunning Basilica, artists and bistros, the location makes for a charming location for a photoshoot. Ladies, we would suggest ditching the high heels for this one! Walking around on the cobbled pathways may prove to be challenging.

One of the best photography spots in Paris are quaint Parisian cafés. This is where you can capture less formal, “a piece of life” type of photos. Avoid the tourist crowd by visiting cafés early in the morning. It’s smart to make a strategic stop in a café between two main locations for an outfit change.

One of the most popular cafés for a shoot is Café Le Nemours. This place can easily be combined with a shoot at the Louvre or Palais Royal.

5 Most Beautiful Villages in France to Escape the Urban Chaos