8 Best Places To Snorkel In Malaysia With Amazing Marine Life 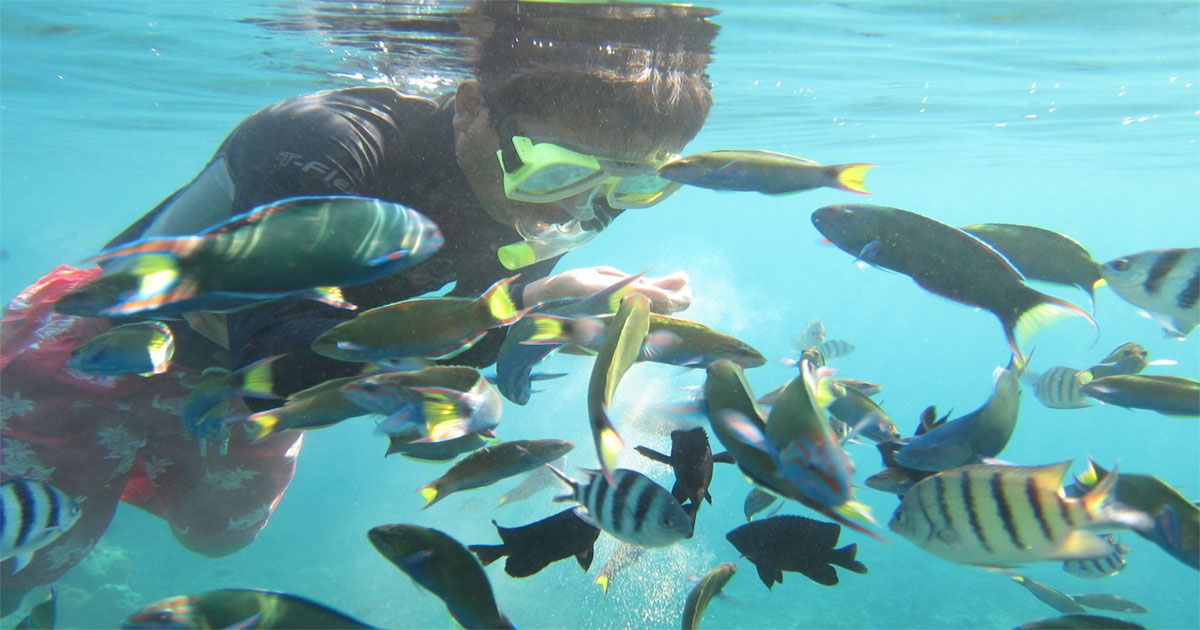 Malaysia is one of the countries in Asia that is known for its tropical islands. There are more than 850 islands in Malaysia, and it offers a great variety of coral reefs and underwater creatures for marine lovers. Often tourists all around the world visit Malaysia because of the huge variety of snorkeling spots all over the country. Here are our picks for the 8 best places to snorkel in Malaysia.

Sipadan Island is on the east coast of Sabah. It is a very popular snorkeling spot because it was formed by living corals growing on top of an extinct volcano cone that takes took thousands of years to develop. Sipadan Island is the only oceanic island in Malaysia, and it is rising 600 meters from the seabed. When snorkeling in Sipadan, you can expect to see a various turtle at Turtle Tomb, spots many hard coral and reef fish at Mid Reef, and a huge school of fish at Barracuda Points. Because of the great underwater biodiversity that it has, Sipadan Island was once described as an “Untouched Piece of Art” by Jacques-Yves Cousteau, the late world-renowned oceanographer.

Mabul Island is another jewel that Sabah has to offer for the snorkeling enthusiast. It is nearby Sipadan Island but offers a very different underwater creature. In Mabul Island, you can expect to encounter odd-looking and interesting creatures such as blue-spotted stingrays and the abundance of corals reef. With luck on your side, you might encounter a whaleshark.

Tun Sakaran Marine Park is located at Sibuan Island, Sabah. The calm water condition makes it perfect for snorkeling and spotting the rich underwater creature. This marine park has at least 548 species of reef fish, 240 species of marine invertebrate, 70 species of soft corals, and 6 species of seagrass. Snorkeling at Tun Sakaran Marine Park will not leave you disappointed. Here the snorkelers can expect to see the whole cast of Finding Nemo, Hawksbill turtles, and a green sea turtle with unsurpassed visibility because of the clear blue water.

Another popular snorkeling spots in Malaysia is Kapalai. Kapalai is in Tawau, Sabah. Two hundred years ago, Kapalai was a beautiful island but erosion has reduced the island to sea level. So, now it is only a sand bar. Kapalai is a world-class diving destination due to the rich marine life and this gives great opportunities to the snorkeler to explore the underwater world. Here the snorkeler can expect to see potato groupers, great barracudas as well as colourful mandarin fish.

West Malaysia also offers some great islands for snorkeler lovers. Redang Island is consisted of nine islands located all around each other and has become a very popular snorkeling spot because of the crystal-clear water and amazing marine life such as baby blacktip shark. When snorkeling in Redang, you must be careful not to damage the coral because corals here are almost all dead. But the colorful marine life is enough to compensate for the almost dead corals. Snorkelers are encouraged to bring bread to feed the huge school of fish.

Tioman Island is off the southeast coast of West Malaysia and offers 6 highly recommended snorkeling sites. Renggis island is topping the chart for the best snorkeling site at Tioman Island because of its shallow water. You can just swim off to the water and expect to see rich varieties of marine life such as pufferfish, scorpionfish, and yellowtail fusiliers. Coral Island and Malang Rocks are another great snorkeling spots for tourist. Although most of the corals are broken here, the marine life is still rich and you can see butterflyfish, moray eels, and even colourful sea slugs. Many tourists also love to snorkel at Salang Reef South, Monkey Bay, and Marine Park Center as well as Tomok Island. Each of these spots offers a different variety of colourful fishes and sea turtles to satisfy the marine lovers.

Perhentian Island consists of Pulau Kecil and Pulau Besar. It is located on the Northeast coast of Malaysia. The famous snorkeling spots in Perhentian Island is Teluk Pauh, Shark Point, and Turtle Point. Each of the spots offers a different experience and marine life for the snorkeling enthusiast. In Teluk Pauh, the most anticipated fish is the huge green humphead parrotfish. This parrotfish can grow up to 130cm. If you fancy swimming alongside a shark, Shark Point is the spot for you. It is safe because the sharks here are small and harmless. Meanwhile, at Turtle Point, you can easily spot a few beautiful sea turtles.

A few miles from Perhentian Island lies Rawa Island. Rawa Island is often dubbed the Maldives of Malaysia because of its crystal-clear water and lovely white sandy beach, hence one of our picks for the best places to snorkel in Malaysia. Though it is near to Perhentian Island, snorkeling at Rawa Island offers a huge and different variety of underwater life than its nearby island. Reefs along the beach are well-preserved and embedded with numerous giant clams and other coral clusters. The common fish that you will encounter when snorkeling here are rabbitfish, damselfish, and triggerfish. The clean water provides excellent visibility for you to spot the rich variety of fish.

The all-year-round tropical weather in Malaysia makes it easy for sea lovers to book a getaway to the abundance of islands here. However, you should take note of the monsoon season. Avoid going to the southwest from April to October and the northeast from October to February. As for the Borneo islands in Sabah, the most suitable time to go snorkeling is April.

7 Highlands in Malaysia to Visit That’s Not Just Genting