HomeJapan8 Beautiful Places in Japan You Won't Believe are True

8 Beautiful Places in Japan You Won’t Believe are True 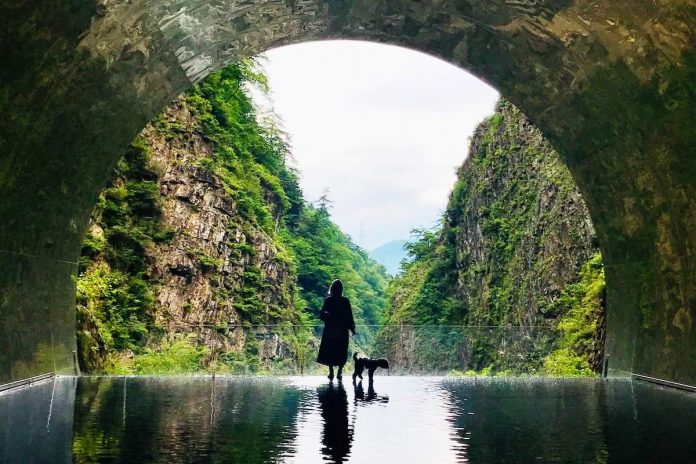 Japan is not just skyscrapers, culture and mountains. It’s no secret that Japan is home to many beautiful natural wonders – from the lavender fields of Hokkaido down to the crystalline waters in Okinawa. Although with Omicron there are new travel restrictions on non-citizens entering Japan, that’s not to say that we can’t look for some travel inspo for our next Japan adventure. Here are some of the most beautiful places in Japan you won’t believe are true!

In Japan, the bamboo is a symbol of strength, and often used to ward off evil near temples. Arashiyama is a sprawling bamboo grove we’re sure you’ve seen on the internet. It is one of the most touristy spots in Kyoto, but hearing the bamboo sway in the wind and the sunlight streaming in between the stalks is quite unlike anything we’ve ever experienced. Come early in the morning to beat the crowd and don’t miss out on Tenryuji Temple and Nonomiya – both are inside the grove.

Miyajima literally translates to ‘shrine island’ and Itsukushima Shrine is famous for its position over the water. Come at high tide and the whole complex appears to be floating on water. 200 meters offshore, a great torii gate stands on the outskirts of the shrine. At low tide, the sea goes out and you can have the unique experience of walking up to the base without getting wet. Sunrise and sunset are some of the best times to see this beautiful place. Make sure to check the tide before you come!

3. Kiyotsu Gorge and the Tunnel of Light, Tokimachi, Niigata

A canyon located on the Kiyotsu River,  Kiyotsu Gorge is a massive natural wonder with unique volcanic columns called columnar jointing. After the walking trails were deemed unsafe and closed to the public in 1988, Ma Yansong and the MAD Architects team built the Tunnel of Light in 2018. A 750m-long tunnel leading out to the gorge, visitors can safely view its panoramic beauty from four different viewpoints. Exhibits and art installations line the tunnel, which reveals details about the gorge and its surroundings.

Along with Kairaku-en and Kōraku-en, Kenroku-en is one of the Three Great Gardens of Japan. The garden is a fine example of beauty from the Edo-period. While the garden has seen damage from wars and natural events, it has always been restored based on historical maps. As one of the larger landscape gardens in Japan, there are many charming bridges, walking trails, teahouses and lots of flowers and greenery in Kenrokuen. No matter the season, Kenrokuen is incredibly picturesque. And the view of Okayama Castle in the background is the cherry on top!


Known as Japan’s Machu Picchu, Takeda Castle is literally on another level. Sitting amidst the clouds, the castle was originally built in 1411 but was abandoned by the 17th century. The best time to catch the floating castle is in October and November around early morning. Get ready for a hike – the best viewpoint is from the mountain slopes of Ritsuunkyo opposite the castle. You can also visit the castle grounds itself, where there are various locations with great views of the surrounding mountains and the town below.

Founded in 645 Senso-ji is Tokyo’s oldest temple, and one of those tourist attractions worth battling the crowds to experience. After passing through the entry gate Kaminarimon, you enter a shopping street over 200 meters called Nakamise. It has a history dating back several centuries, and you can shop for Japanese souvenirs as well as traditional local snacks. At the end of the shopping street is the Hozomon Gate, and beyond this stands the temple’s main hall and the Asakusa Shrine.

Kurokawa onsen in Kumamoto is one of the most famous onsen towns in Japan. The country is famous for its many hot spring towns, but Kurokawa Onsen has retained its olden-day charm and original atmosphere. You won’t find large hotels or tacky advertisements or tour buses here. Purchase an onsen hopping pass at the tourist information center in town. The pass is valid for six months and will allow you to visit three different onsens at ¥1,300 each! Check out our two-day onsen hopping itinerary in Kurokawa Onsen.

Zao is home to not only one of the best ski resorts, it also has a unique scenery straight out of a winter fairy tale… or horror film. Snow covers the tall trees here and the freezing wind shape them to look like look like gigantic, mutant snowmen. These ‘monsters’ even have their own festival every early February, complete with illuminations and fireworks! If you can’t make it for the festival, then put your snowshoes on where you can see these giants up close!