HomeThailand7 Most Unique Temples in Thailand to See in Person

7 Most Unique Temples in Thailand to See in Person 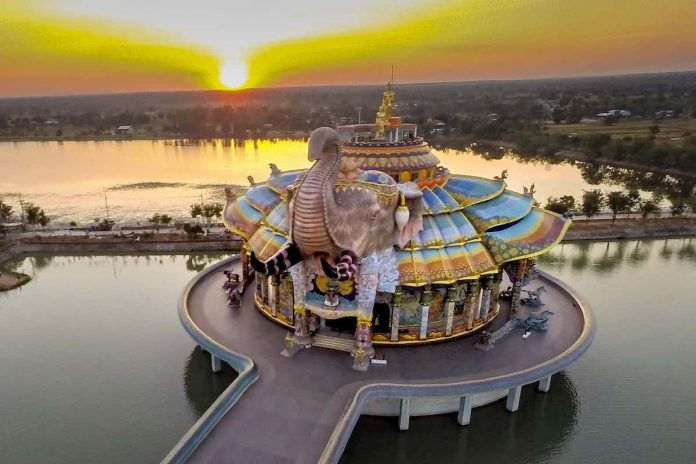 A predominantly Buddhist nation, there are over 40,000 temples dotting the whole of Thailand. We all know the most famous ones like the Temple of the Emerald Buddha and Wat Pho in Bangkok, or Wat Phra That Doi Suthep in Chiang Mai. But no matter how many temples you’ve already seen, there are still plenty of unusual, quirky, and unique temples in Thailand that are anything but ordinary. Here are some of them that definitely deserve your time!

Although Wat Rong Khun in Chiang Rai is a temple, it is also an art exhibition. Also known as the White Temple, local artist Chalermchai Kositpipat rebuilt the temple after it fell into disrepair. Using his own funds, he completely rebuilt Wat Rong Khun as an offering to Buddha, and it was completed in 1997. His belief is that by doing so, Buddha will give him immortal life. The artist intends for the area adjacent to the temple to be a center of learning and meditation. Today the works are ongoing, and they are not expected to be completed until 2070.

Located in Nakhon Ratchasima within Thailand’s Isaan region, Wat Ban Rai is pretty much in the middle of nowhere for the average tourist. Sitting in the middle of a big lake with a bridge connecting it to the mainland, the first thing you will notice is the massive elephant head and two naga serpents. The idea behind this temple comes from the highly revered monk, Luang Phor Koon, who passed away in 2015. Inside the temple, there are four floors to explore, and there isn’t any part of the building without some intriguing artwork.

Also known as the Temple of a Million Bottles, this temple in Sisaket is built entirely out of recycled beer bottles! In 1984, local Buddhist monks grew tired of the mounting trash and spearheaded a movement to create a greener lifestyle. Residents and businesses were encouraged to donate their used beverage containers, and in two years the main temple was built, complete with a spellbinding design. Today the site has been extended, and there are no plans to stop. The more bottles collected, the more structures they plan to build!

One of the most unique temples in Thailand, Wat Phu Tok is perhaps also the most exciting one you can visit. Reason being it is built into a mountain and it is seven storeys high to correlate to the seven stages of spiritual enlightenment. Visiting it requires you to climb up many wooden plank staircases, and the higher you go, the steeper it gets. And because of its rugged terrain and remote location, wildlife and dangerous snakes are not uncommon. The sixth level is arguably the most interesting with wooden walkways anchored into the side of the cliffs. There are many viewpoints, and the view is fantastic from every direction.

Although Phra Prang Sam Yot is a popular tourist destination, it makes our list for its notable resident population of macaques! This is also where the yearly Monkey Buffet Festival takes place. Locals believe that monkeys descend from Hanuman, the monkey deity and his army. According to legend, they saved the wife of Lord Rama from the hands of a demon lord. Ever since, the people believe the monkeys bring good luck and they can roam anywhere they please. Even if they do cause some trouble sometimes! If they get a little too much, go inside and you’ll be safe from them.

Wat Phra Dhammakaya is famous for its architecture, which looks more like a futuristic spaceship than a traditional temple. It takes on a rather simplistic focus, focusing most time and money on promoting the Dhammakaya tradition, a belief that inner peace will lead to world peace. The temple has been described as the face of modern Thai Buddhism. They use modern technology, marketing methods and interpret Buddhist doctrines in ways that have led to controversy and even a government crackdown.

Wang Saen Suk is the largest hell garden in Thailand and it depicts the Buddhist hell. Despite its gruesome scenes, the temple still draws in many tourists, and even families. After passing a brightly coloured “Welcome to Hell!” sign, visitors will see sinners ripped apart by dogs, burnt alive in cauldrons, disembowelled by birds, and having their heads replaced with those of animals. Another sign reads “If you meet the Devil in this life, don’t postpone merit-making which will help you to defeat him in the next life”. Feeling a guilty conscience? Don’t worry – there are donation boxes next to each scene to encourage penance through charity.

6 Best Thai Restaurants in Bangkok You Have to Try