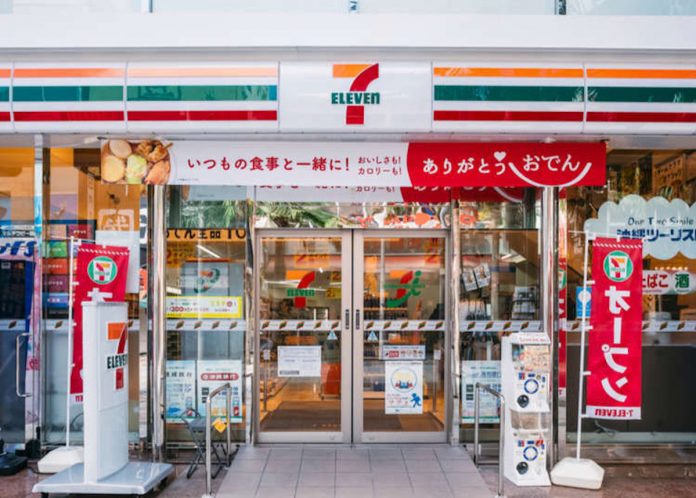 Convenience stores like 7-Eleven in Japan are called conbini. There are usually a handful on every block, and most are open 24/7. In Singapore, the most we can get is some instant noodles or sandwiches. But 7-Eleven food in Japan includes entire hot meals and areas where you can sit and enjoy your food.

Food doesn’t always come cheap in Japan, but a sumptuous and wallet-friendly three-course meal is easily achievable at a conbini. Here are the top 10 7-Eleven food in Japan you have to sink your teeth into!

Onigiris are rice balls and they are a common quick meal for the Japanese. The rice ball is wrapped in seaweed, and within it is usually some form of protein filling such as tuna, salmon or tamago.

In Japan, you’ll also find onigiris in flavours that are foreign, such as umeboshi (pickled plum), and even in fancier formats like the omurice! This little treat is perfect for on-the-go travel (but please don’t eat while you’re walking in Japan – that’s a cultural faux pas!)

Sandos are sandwiches in Japan. They might look unassuming, but they’re cheap and good. Katsu (pork cutlet) and tamago (egg mayo) are two most popular flavours, but there are also some standouts like turkey and chicken teriyaki.

7-Eleven in Japan is also known for their dessert sandos – get them in fruity flavours such as strawberry and cream!

If you need something more filling, go for a bento set. You’ll find anything from rice with teriyaki meat, deep-fried pork cutlets, chicken and scrambled eggs, Japanese curry, or even pasta.

These convenient meals can be heated up in the conbini’s microwave for a fuss-free yet satisfying meal. 7-Eleven bentos give you a bang for buck you won’t find anywhere else!

Oden is a Japanese soy sauce soup stew filled with ingredients such as boiled eggs, daikon, konjac and fishcakes. You can mix and match the oden ingredients to your liking, and they are served fresh at the 7-Eleven counter.

You’ll typically find oden during the colder months, between September to April. They’re great for warming you up during the winter season!

Of course, we can’t talk about 7-Eleven food in Japan without mentioning their instant noodles. The variety of flavors is so extensive, there’s usually an entire aisle dedicated to instant noodles in most stores.

You’ll find some interesting flavors such as Pringles-flavored noodles, but the absolute must-try is the instant noodles with a one Michelin-star rating!

Here’s something you’re not gonna find in Singaporean 7-Eleven stores – actual fried chicken! Karaage makes for a great side dish or an afternoon snack, and these Japanese fried chicken puts to shame the Western-style fried chicken that we know. They’re crispy and well-seasoned, without being overly salty and oily.

Yakisoba is essentially Japanese fried noodles, and you might be thinking, “Isn’t that weird to eat with a hot dog bun?” Well, don’t knock it until you’ve tried it! The combination is actually a favourite amongst Japanese people, and they go surprisingly well together. Yakisoba buns can be found in conbinis, but also in local bakeries in Japan.

Fancy a sweet afternoon snack? Try warabimochi! It is similar to mochi, except that it is made from bracken starch instead of rice flour. It also has a softer and more jelly-like texture. You can always find some form of warabimochi in 7-Eleven stores, and flavours change according to the seasons, the most one being matcha.

Trust the Japanese to turn desserts into something healthy! Round up your Japanese 7-Eleven meal with an apple ice bar, made with 93% apple juice as well as frozen apples. It’s a great way to get in your daily dose of fruits, especially if you’re someone who doesn’t fancy eating fruits in their natural state. Great way to cool down in summer too!

For something a little more sinful, try the local 7-Eleven macaron ice cream! They come in two flavors: Chocolate Mint and Mixed Berry. Ice cream is sandwiched two pieces of crisp, sugary macarons that taste as good as they look. This sweet treat will not just capture your taste buds, but also your shutter clicks for Instagram.