HomeSouth Korea7 Awesome Things to Do on Jeju Island

7 Awesome Things to Do on Jeju Island 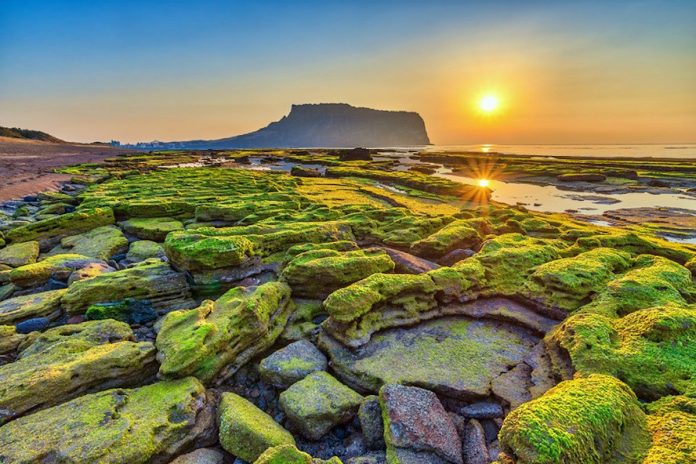 Hop on a flight an hour and a half away from Seoul and you’ll get to Jeju Island. A popular destination for honeymooners and vacationers alike, Jeju Island is home to a whole host of natural wonders and unique attractions. From breathtaking sunrises to quirky museums, here are seven things to do on Jeju Island!

Mount Hallasan on Jeju Island is a dormant volcano and Korea’s highest mountain. It is of spiritual significance, as locals believe that gods and spirits live on the mountain. Its surrounding area is a designated national park, and visitors can hike to the top of the mountain. Standing at 1,950m above sea level, the hike is very long, but you can complete it on the same day if you start early. At the top of the volcano, you will be able to peer into the 400m wide crater and see the crater lake. If you’re a hiking enthusiast, hiking Mount Hallasan should be high on your to-do list! There are a total of five trails in the national park, but not all of them lead to the summit. You can read more about the trails here!

2. Hike around the island

Instead of hiking up the mountain, the Olle Gil trail will allow you to hike all around Jeju Island. It totals 425 km so it’s definitely not something you can complete in a day, but there are 26 different trails so you can pick which ones to do. They differ in level of difficulty. Some will take just an hour, while others can take up to eight hours. Regardless of which trails you choose to do, the Olle Gil trail is a great way to slow down, see the island and fully enjoy its natural beauty.

3. Catch the sunrise from a volcanic crater

A UNESCO World Heritage Site, Jeju’s Seongsan Ilchulbong is famous for many things, but is best known for the magnificent sight of the sunrise over it. From far it looks like a fortress, but it is actually a volcanic cone, formed by hydrovolcanic eruptions about five thousand years ago. At 182 meters high, visitors can climb up the peak from the northwest side in just 30 minutes. In spring, the volcanic peak comes alives with blooming yellow rapeseed flowers, doubly rewarding your climb.

Jeju Island is home to many beautiful beaches. Hamdeok Beach is close to Jeju city and a great place to start. It seems like there is always something going on here: sports events, concerts, nightlife. It’s a lively hub with lots of hotels, cafes and restaurants in the area. For something quieter, Jungmun Beach is empty outside of summer. Its waves make it a great spot for surfing enthusiasts. Surfers also gather here annually for the Jeju International Surf Competition. For a day of lazing under the sun, the stretch of white sand, turquoise water and pine forest at Hyeopjae Beach makes an absolutely exceptional landscape.

Another addition to Jeju’s natural attractions are the beautiful waterfalls. Some of the most popular ones are Cheonjeyeon and Jeongbang waterfalls. There are three different sections at Cheonjeyeon waterfall, which is also known as ‘the pond of god’. According to local legend, seven nymphs descended from heaven to come to bathe there. From here you can also connect to Seonimgyo Bridge, which depicts the seven nymphs playing musical instruments. Further east, Jeongbang waterfall is the only waterfall in Asia to fall directly into the ocean, and it is also one of the ten greatest scenic wonders of Jeju. Legend has it that a holy dragon lives underneath it, and its spirit is in the water which can cure diseases.

Manjanggul Cave is an impressive lava tunnel on Jeju Island, formed over 250,000 years ago! It measures over eight kilometers, 18 meters in width on average and over 20 meters in height. However, only about one kilometre of the tunnel is open to the public. The lava tunnel is of significant scientific and heritage value, owing to its excellent condition of preservation. Wear a pair of shoes with good grip so you don’t slip, and bring a jacket along, since the tunnel is about 10C degrees colder. A variety of bats also call this place home, so don’t be too surprised if you see or hear them flapping around!

7. Check out a cactus village

An under the radar spot in Jeju and not often in the travel guides, the village of Wollyeongri is covered with cactuses. These cactuses grow naturally between the rocks. The species are originally from Mexico, and until today, nobody knows how these cactuses ended up on the island. Regardless, they make for quite a sight to behold, and during summer they even bloom with yellow flowers!

10 Most Beautiful Places in South Korea to Visit