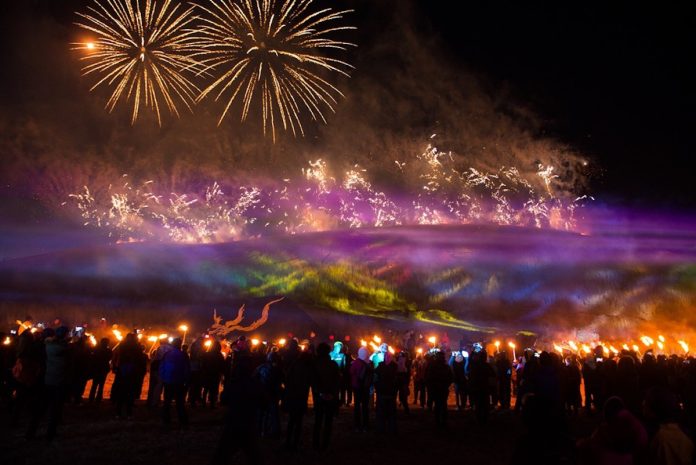 The Jeju Fire Festival is probably the most well known of all Jeju festivals, and maybe even of all traditional South Korean festivals. Celebrated over three days in late February and March, the festival is a reinterpretation of Jeju’s cattle farming tradition. It has its roots in a tradition called ‘bangae’, which is to burn down the fields between late winter and early spring. This exterminates vermin and renews the land before the cattle are set free on the fields to graze. Symbolically, it signifies the burning away of the old, and welcoming new abundant energy.

Each year, a different oreum (volcanic cone) is selected to be set ablaze, lighting up the night sky in a spectacular sight. There are also fireworks, performances, contests, a market, a torch march and many different cultural and agricultural education programs. If you can only make it for one festival, make it this one!

Japan is famous for its beautiful sakura blossoms, but South Korea also has its fair share of blooms. Every end of March to early April, the Yeouido Spring Flower Festival takes place and Seoul erupts into a sea of pink. Over a thousand blossoming cherry trees line the streets, welcoming the spring. During this time, the Yeouiseo-ro Road (Yunjung-no) is closed off to vehicles, so visitors can enjoy the cherry blossoms in a peaceful setting.

Other spring flowers like azaleas and forsythia are also in full bloom, making it a beautiful sight to behold. The atmosphere is also great at night, when the cherry blossoms are lit up. There are live music and cultural performances, along with lots of sakura flavoured drinks, desserts and snacks.

Around 200 kilometres south of Seoul, the town of Boryeong sees millions of visitors in mid-July for the Boryeong Mud Festival. They come not only to bathe in mud, but also to take part in all things mud-related. The festival was first held in 1998 to promote the benefits of Boryeong’s mineral-rich mud. It contains bentonites and germaniums and the festival has become very popular amongst locals and foreigners.

Over a ten-day period, merrymakers can enjoy mud wrestling, mud skiing, bathing in mud pools, mud body painting and just general mucky fun. Mud cosmetics are also on sale too! As the night falls, the young and young at heart can continue partying on the beach, where music and fireworks keep the celebrations going.

As the weather gets colder and the days get shorter, South Korea welcomes it with beautiful lantern festivals. The Jinju Namgang Yudeung Festival is one of the oldest traditional South Korean festivals and most popular lantern festivals in Korea. The local people light up thousands of lanterns by the bank of Nam River and wish for health and prosperity for themselves and their loved ones.

This festival traces back to 1592, where lanterns were used as military signals to prevent Japanese soldiers from crossing the river. They were also used during the Japanese Invasion as communications between families. Along with the surreal sight of innumerable lanterns floating on the water, visitors can enjoy the fireworks, street parades, performances, local street food and even make their own lantern.

You might know of Moses who parted the Red Sea. But did you know that the sea parts naturally here in March? In Jindo in South Jeolla province, the sea parts in March and reveals a 2.8 kilometre-long pathway between the mainland and Jindo Island. The phenomenon is known as tidal harmonics, which causes extreme low tides.

The Jindo Sea Parting Festival is still quite under the radar amongst tourists but quite a popular one to locals. Every end of March, hundreds of thousands gather to walk the path, while others hunt for clams and seaweed. Make sure to bring your wellies as it will be muddy!

7 Awesome Things to Do on Jeju Island

10 Most Beautiful Places in South Korea to Visit