HomeAccommodation5 Most Luxurious Ryokan in Japan

5 Most Luxurious Ryokan in Japan 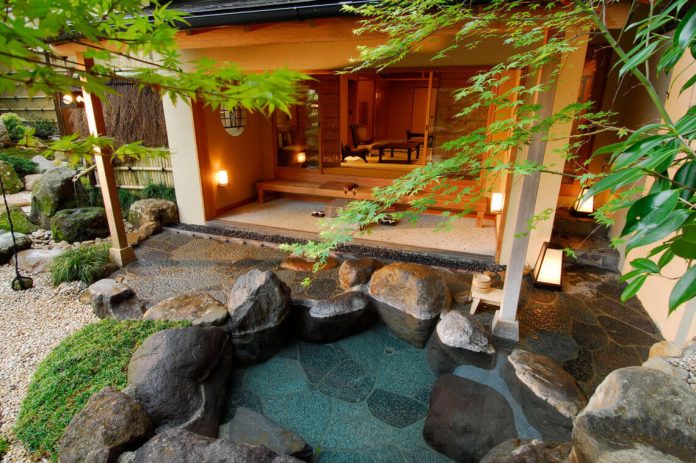 The most luxurious ryokan in Japan may not be decked out in Italian furniture or have the most high-tech facilities. Instead, they are usually simple with tatami mat flooring, futon beds and low tables. The real perks of staying in a ryokan is the Japanese-style of hospitality (omotenashi), multi-course dinner fit for a king (kaiseki) and ensuing breakfast spread. Although not always, they usually also provide access to an onsite or nearby onsen.

Traditional ryokan are one of the few ways to immerse in Japan’s age-old customs. Over the last few years, contemporary options that approach the ryokan concept in new ways have also sprung up. Whether you’re looking for the new or the old, here are the most luxurious ryokan in Japan that’s worth a night or two.

Right in Tokyo, Hoshinoya Tokyo is one of the city’s very few luxury ryokan. With only six rooms on each floor, you will rarely bump into another guest when exploring the halls or getting a snack in the ochanoma lounge. Meals are not included in room rates here, but their traditional Japanese breakfast is certainly worth a try. As is their dinner restaurant, where French cuisine comes together with Japanese ingredients and techniques. We know there’s lots to do in Tokyo, but make time for the ryokan’s open air and indoor baths. The water comes from the area’s first natural hot spring!

Even though Hoshinoya Tokyo is a very classy, luxurious ryokan in Japan, you will also find traces of the Edo Period throughout the property. A night here doesn’t come cheap, but it is definitely a unique haven within Tokyo. It’s not hard to see why they are often fully booked, especially over the holiday periods.

Zaborin is a contemporary luxury ryokan in Hanazono, Hokkaido. With just 15 villas, it offers guests an incredibly exclusive and intimate experience. Unlike other ryokan where communal onsen is the highlight, privacy is the main focus here and every room has its own indoor and outdoor onsen. Once you arrive, you’ll get to watch a 62-year-old tea master expertly prepare your complimentary cup of matcha. The tea ceremony takes place next to the hotel’s library, where there are books and DVDs for your entertainment.

The establishment is easy to access, but you’ll feel like you’re in the remote wilderness. Rooms look out onto meadows or the Hanazono forest, and the bar offers a front-row view of Mt. Yotei. Unlike traditional ryokan, most of the rooms here are Western style with beds instead of futons, and wooden floorings take the place of tatami mats. Your meals – expertly prepared by chef Yoshihiro Seno – will also be deeply unforgettable.

Gora Kadan is one of the most luxurious ryokan in Japan and it is also one of the most expensive ryokan you could stay at. Averaging at US$1,500 a night, it was previously the summer home for the Kanin-no-miya imperial family. The property was converted into a ryokan in 1952, and today it is arguably the most famous ryokan in Hakone. On the outside it looks like a western villa, and its modern design elements fuses effortlessly with Japanese traditions.

Expect one of the highest standards of omotenashi to be found anywhere in Japan. Every room here features mesmerizing views of the mountainside, but the most coveted ones come with their own open-air baths. The property also has its own spa, heated pool and even a gym. Your meals are served to you at a prearranged time, but you can also choose to have them at the restaurant building.

Even though Gion Hatanaka is right in the heart of the Gion district, you immediately enter into a world of calm upon stepping into this ryokan. Gion Hatanaka stands out from other ryokan as it offers geisha entertainment and maiko evenings, where guests can observe traditional dances and performances. This also involves a kaiseki dinner, and you can speak with the maiko and even play some maiko drinking games.

The rooms here are beautifully decorated and more spacious than usual, with its own ensuite bathtubs. After you finish your sightseeing in the nearby Yasaka Shrine, Kodaiji Temple or the Geisha Village, come back to enjoy a relaxing dip in the communal and private baths.

Situated on the banks of the Kurashiki River in the Bikan Historical Quarter, Ryokan Kurashiki was originally the home of a wealthy sugar merchant. The whole place went through a renovation a few years ago and now boasts of all the modern comforts one would find in a luxury hotel, but it retains the unique charm of the Bikan quarter.  Over the years, the ryokan has seen many high-profile guests and celebrities, including Italian actress Sophia Loren.

With just eight rooms you can expect an ultra exclusive experience here. The kaiseki meal is also one-of-a-kind, featuring local ingredients from the Seto Inland Sea. After you’re done exploring the historic district, soak your tired limbs in the private onsen, which is available for a one-hour booking free of charge.5 Most Luxurious Ryokan in Japan