HomeFrance5 Most Beautiful Villages in France to Escape the Urban Chaos

5 Most Beautiful Villages in France to Escape the Urban Chaos 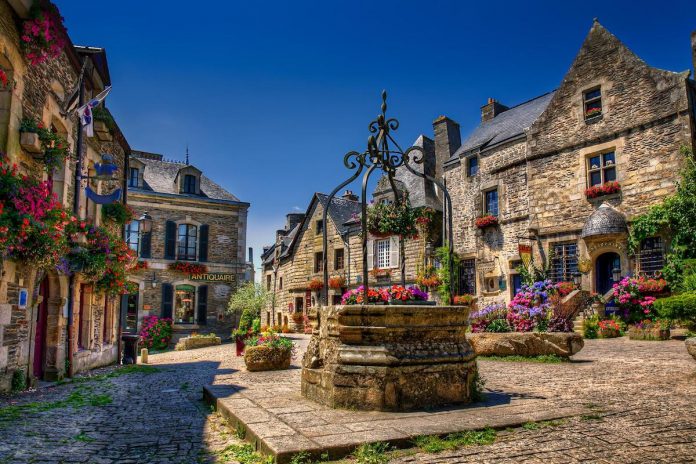 France is the most popular destination in the world. Outside of the city of love, France is also home to charming, centuries-old villages. Rural France is a joy to explore, from its old cobbled streets to vineyards, stone cottages and castles. Escape the urban chaos and lean into the local way of life, here in some of the most beautiful villages in France.

Ploumanac’h is a village port in a natural harbour, voted ‘the village most preferred by the French’ in 2015. Apart from being one of the most beautiful villages in France, Ploumanac’h is also the best starting point to explore Côte de Granit Rose, one of the most stunning places in France. The village is famous for the pink-tinted sand and rock formations, which makes an enchanting contrast with the blue ocean. Other spots of interest include the tidal mill and the Ploumanac’h Lighthouse. On Ploumanac’h Beach, the oratory dedicated to Saint Kireg is well-known to young women. According to legend, if they stick a needle in the statue’s nose and it doesn’t fall out, it means they’ll be married within the year!

Eguisheim is a medieval village in France’s Alsace wine region. The narrow, concentric streets of its old town are lined with many preserved half-timbered houses and pretty floral blooms. It’s not hard to see why the village is in the top 20 of Les Plus Beaux Villages de France. If you love cycling and hiking, there are many marked trails around Eguisheim. Popular destinations include the centuries old Château Saint-Léon, Les Trois Châteaux and Château de Hagueneck. A little further away are Château du Hohlandsbourg and Château de Pflixbourg, both accessible by foot or by car.

Another ‘France’s favourite village’ and Les Plus Beaux Villages, Rochefort-en-Terre is picture perfect. Sitting high above the River Arz, make your way through narrow streets, past ateliers, workshops and geranium-bedecked houses. As an ‘arty’ town, the streets are dotted with artists and craftspeople. Think potters, a candle maker, a toymaker… But don’t leave town without visiting the artisan biscuit makers, Le Rucher Fleuri. They are highly regarded throughout the region for its pain d’épices!

In the heart of one of the biggest ochre deposits in the world, Roussillon is famous for its magnificent red cliffs and ochre quarries. The red, orange, yellow and brown shades of the earth form a striking contrast with the green pine trees and the vivid blue Provencal sky, making this a truly magical site. Legend holds that the cliff’s color resulted from a medieval squabble. The town’s beauty, Seramonde, was in love with a troubadour. But the Lord of Roussillon loved Seramonde too and had his rival murdered. Brokenhearted, Seramonde threw herself off the cliff, her blood staining the cliff forevermore.

A commune and fishing village, Barfleur is the first port of the Anglo-Norman Kingdom. From its granite houses and church architecture, you can see the strong ties to England. History aside, here is where to get a taste of fresh wild mussels straight from the sea, as well as indulge in all the moules frites. Simply duck into any of the little harbourside restaurants. After eating your fill, a walk in the village is necessary. Along Saint-Thomas-Becket Street, you can appreciate old houses of the 16th to 19th century which form a remarkable architectural unit. On the other side of the port, you have to stop at the birthplace of Saint Mary Magdalene Postel. And on the beach, the ‘landings’ of fish, mussels and other seafood is always a spectacle.

6 Most Romantic Hotels in Paris To Impress Your Other Half